Emerald Technology Ventures and others close round aimed at adding capacity for silicon-based LED wafer production at Azzurro Semiconductors.

Azzurro Semiconductors, a Germany-based manufacturer of semiconductor wafers with a novel platform for LED production, has closed a €14.5 million round of venture finance aimed at building additional capacity.

Emerald Technology Ventures and Good Energies, which both specialize in cleantech investments, and Wellington Partners are all new investors in the company, joining existing partners Cedrus Private Equity and IBG Innovationsfonds.

Azzurro specializes in the deposition of high-quality layers of gallium nitride (GaN) semiconductor material on large-diameter silicon wafers, a technology platform that holds a great deal of promise for two distinct markets. One is in power electronics, where the novel material system is able to improve switching efficiencies in AC/DC conversion. The other market is in the photonics sector, where the use of a silicon platform promises to significantly reduce the cost of high-brightness LEDs.

“Azzurro presents an exciting opportunity to serve two independently fast-growing markets with cheaper and better-performing products,” said Markus Moor from Emerald Technology Ventures, who is now joining Azzurro’s supervisory board. “The proceeds of this financing will allow Azzurro to build out the necessary capacity and economies of scale to supply these growth markets.” 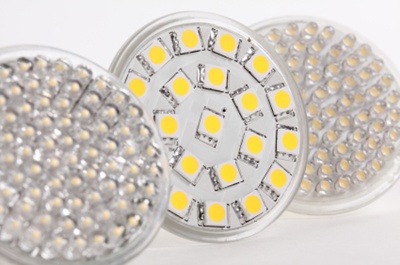 Growth step
Christian Reitberger from Wellington Partners, who is also joining the supervisory board, added his backing for a volume ramp: “We share Azzurro’s belief that the time has come to build a high-volume GaN epiwafer foundry to enable industry-wide adoption,” he said. “With this growth step, Azzurro will bring the industry the long-anticipated arrival of GaN-on-silicon.” Wellington also took part as the lead investor in the recent venture funding of Glo, a Swedish start-up that is aiming to manufacture high-brightness LEDs based on GaN nanowire materials.

Azzurro’s approach is based on depositing a thick buffer layer (8 µm) that sits between the silicon wafer platform and the light-emitting layers of GaN in the LED wafer structure. The buffer layer is needed because of the significant lattice mismatch between the crystal structures of silicon and GaN; without it, it is impossible to get the structures to emit light in an efficient way.

The vast majority of existing LED manufacturers produce their devices on either sapphire or silicon carbide wafers, both of which provide a better combination of material characteristics. But neither material offers a perfect solution, and in recent years two new approaches have become increasingly viable. One is to use GaN substrates – previously unavailable due to the difficulty in manufacturing the large-scale GaN crystals needed for volume production, and still very expensive – and the other is to use silicon, which is already available in suitably large sizes.

8-inch platform
Azzurro has spent a number of years developing its GaN-on-silicon epitaxial wafer technology on a 6-inch wafer platform and, according to Emerald Technology Ventures, will soon offer 8-inch GaN-on-silicon wafers. That could be crucial, because most silicon semiconductor fabs around the world are set up for either 8-inch or 12-inch wafer diameters, and could use standard processing equipment for some of the LED manufacturing steps if 8-inch LED wafers were to become available.

Based in Magdeburg, Azzurro has already been engaged in a developmental program with fellow German company Osram Opto Semiconductors, one of the world’s leading LED manufacturers, to evaluate the suitability of the approach for volume applications. The two companies signed an exclusive technology transfer agreement two years ago, with the exclusivity due to expire earlier this month.

Azzurro is not alone in focusing on GaN-on-silicon technology – the Chinese company Lattice Power has stated its ability to produce LEDs based on the material combination, albeit only on a 2-inch wafer, and this year it has been busy installing a number of reactors to be used for LED production at its facility in Nanchang. Lattice Power has also launched its own LED light bulb, dubbed the “Snowcone” and said to offer an efficacy of 92 lm/W, albeit with a low color rendering index.

If Azzurro is able to offer high-quality, GaN-on-silicon wafers at an 8-inch diameter and at a reasonable price point, there should be an opportunity to significantly reduce the cost of HB-LEDs, something that is widely viewed as crucial if solid-state lighting is to make a major impact in general illumination applications such as everyday lamps in the home.