GSI catches up on financial reporting

The photonics group finally releases its annual report for 2009, which details the turmoil caused by its acquisition of Excel and the global downturn.

The GSI Group of photonics companies, which emerged from bankruptcy proceedings in the summer, has published its 2009 full-year financial report, following a delay of several months.

The group’s 10-K report was filed with the US Securities & Exchange Commission (SEC) on October 1, along with the outstanding three quarterly reports for 2009, all of which had been delayed by financial reporting problems at the company. 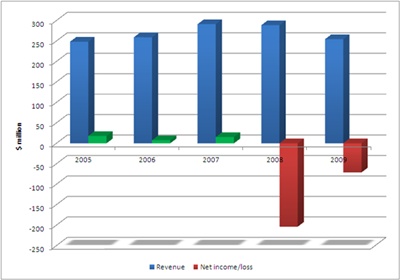 Chain of events
Much of the 2009 loss resulted from expensive one-off costs relating to company re-structuring and the re-statement of accounts. That chain of events was kicked off in late 2008 when holders of the $210 million loan notes issued in connection with the Excel acquisition told the company that the late filing of its quarterly report for September 2008 broke a key covenant of the loan agreement.

What the 2009 accounts also demonstrate is the basic profitability of the Excel segment: sales of $130.0 million attributed to the acquired unit delivered a gross profit of $52.6 million for the full year – equivalent to a healthy gross profit margin in excess of 40 per cent, and going some way to explaining why GSI had been so keen to acquire it.

Indeed, the 10-K filing shows that in October 2008, shortly after the Excel acquisition was completed, GSI’s management team proposed that it would be able to service the associated debt repayments by achieving a level of operating profit approximately equal to the annual interest due on the $210 million loan notes, which was to be charged at 11 per cent.

But by December 2008, it was becoming clear that the impact of the global economic slow-down would wreck that strategy. Even worse, it had suddenly emerged that there were potential errors in the company’s accounts, relating to the recognition of revenue from sales to customers in its semiconductor systems business unit.

“By March 2009, the global economic recession was having a major adverse effect on GSI’s businesses,” notes the 10-K. “In addition, the company had announced that its previously issued interim and annual financial statements for fiscal years 2006 and 2007 and its interim financial statements for the first two quarters of fiscal 2008 could not be relied upon.”

Salary cut
Against that backdrop, the company’s management recommended that the salary of Sergio Edelstein, GSI’s CEO at the time, be reduced by 20 per cent – along with that of various other executives. Edelstein eventually drew a salary of $442,400 in 2009, a decrease of approximately 14 per cent from the $514,000 that he had been paid in 2008.

Edelstein left the company when the re-structuring effort was completed in May 2010. The 10-K states that, in exchange for “a set of comprehensive releases” from the former CEO, the company agreed to pay Edelstein $520,000 in the form of salary continuance, as well as a lump sum payment of $259,123.48, and immediate vesting of all outstanding restricted stock options. These were issued upon GSI’s emergence from bankruptcy in July 2010.

That deal actually represented a significant climb-down from the CEO’s previous agreement. In June 2006, when Edelstein first joined the company from KLA-Tencor, GSI had agreed to pay him two years’ salary and two years’ worth of full bonus payments, in the event of a change in control of the company in which his position was eliminated.

Currently searching for a new CEO to lead the re-structured company, GSI’s issuing of 2009 financial statements is a key step towards repairing the damage caused during the past two years. And, although the company is yet to issue full results for any of the first three quarters of 2010, in September it announced bookings of $100 million during the second quarter of 2010, more than double the 2009 equivalent and up from $95 million booked in the first quarter as the microelectronics market in particular made significant investments in capital equipment.

Full quarterly results for first nine months of 2010 are now expected by the end of the calendar year, at which point GSI should be back on track.