Software giant's buy-out of Optical Research Associates is the latest in a string of deals to highlight emerging themes in the photonics sector. 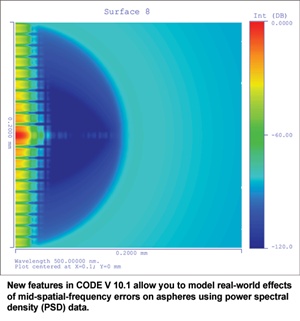 One of the best-known names in optics software thanks to its Code V and LightTools products, Optical Research Associates (ORA) has been swallowed up by Synopsys, a giant software company that specializes in electronic design applications. The deal, for an undisclosed sum, is the latest in a flurry of recent acquisitions to affect the optics and photonics sector:

The trend is partly a natural result of the economic turmoil witnessed in 2008 and 2009. Since then, some companies have made a concerted effort to conserve cash, putting themselves in strong buying positions. Meanwhile, others have struggled to remain afloat, and low market valuations have helped to make some acquisitions look like very attractive propositions to the cash-rich firms.

Most of the recent activity in photonics has been conducted in cash: Bruker spent $229.4 million on Veeco’s metrology unit, while IQE is to pay between $5.5 million and $14.15 million for Galaxy, depending on the latter’s 2010 financial performance. Rofin-Sinar’s acquisition of LASAG was for an undisclosed cash sum, while Synopsys, which has huge cash reserves, is likely to have dipped into that pot in order to complete the ORA deal.

Class actions
The most complex of the recent acquisitions is FLIR’s buy-out of ICx, which resulted from a tender offer by a FLIR subsidiary for all of the outstanding shares of ICx, followed by the merger of that purchasing subsidiary with ICx. The tender offer valued each ICx share at $7.55 – a figure that has attracted no fewer than four class-action lawsuits against ICx. Those lawsuits all contend that ICx was sold at a price that did not reflect its fair market value, and that ICx’s senior management and key shareholder Wexford Capital were complicit in that under-valuation in a bid to agree a rapid sale.

Those arguments may run and run, but there is another key reason behind most of these acquisitions, and that is the emergence and growth of new photonics applications that are gaining the attention of larger companies.

The most obvious example of that is in Synopsys’ acquisition of ORA, which represents what the former describes as its “initial move this [optical] space”, wording that hints at more activity in the future. Although Synopsys' software has certainly been used previously in the design of optoelectronic structures such as multi-junction solar cells and light-emitting diodes, a key motivation for the ORA deal is the dawn of the solid-state lighting market:

"The emergence of the LED industry definitely presents an opportunity," the company told optics.org. "LEDs are key enablers for rapidly growing areas such as solid-state lighting, display backlighting and automotive lighting."

Logical adjacency
“Optical design is a logical adjacency for Synopsys,” is how Howard Ko, the senior VP and general manager of the company’s silicon engineering group (SEG), described the ORA deal. “We believe that together we can provide substantial value to ORA’s current customers, as well as to growing and emerging markets in solid-state lighting and LEDs.”

Synopsys also acknowleges ORA's strong identity within the optics sector. Although the business will become part of its SEG, that identity will be maintained: "We recognize the value in the ORA brand and expect this to be retained for the foreseeable future," a company spokeswoman said. "ORA has in place an extensive worldwide sales distribution and support network. It is our intention to retain the existing distributors."

George Bayz, ORA's president and CEO, will stay with the company following the change in ownership, along with "the majority" of the company's executive management team, Synopsys confirmed. ORA's sites in Pasadena and Tucson will remain, while its Westborough facility will be integrated into Synopsys' Marlboro, Massachusetts, office.

Synopsys estimates the total addressable market for ORA's optics software at more than $50 million currently, with the LED sector providing a strong impetus. "The market is expected to expand rapidly with the growth in LED lighting," said the company. "Growth of the overall high-brightness LED market is greater than 20 percent. The growth of the software focused on LED is slightly less than that, approximately 12 to 15 percent."

Sensing momentum
Likewise, the FLIR/ICx deal is an acknowledgement of the growing importance of advanced sensing technologies for defense and security applications. And while the technologies employed by ICx are many and varied, photonics is key to some: among its explosives-detecting products are a Raman-based screening system for bottled liquids and a fluorescence system capable of detecting military-grade compounds.

On a smaller scale, the growing market for high-specification infrared imaging is the key reason behind IQE’s latest acquisition. The GaSb and InSb materials in which Galaxy specializes form the basis for sensitive detectors operating in the mid- and long-wave infrared spectral range.

Examples of their usefulness include the Fourier transform hyperspectral imaging spectrometer recently introduced by ABB Analytical, an instrument using two detection modules and based around an InSb detector that extends the useful detection range to a high sensitivity in the infrared region, enabling long-range stand-off sensing of dangerous gases.