After re-filing financial results with an adjustment for a "doubtful" account, Emcore says that the latest quarter will show a significant jump in sales. 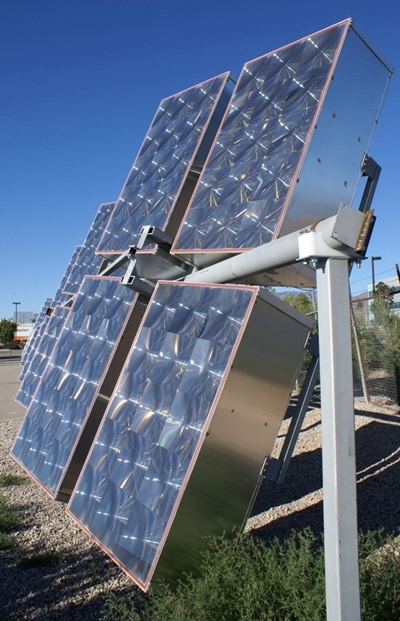 Emcore is predicting a sharp sequential increase in sales for the quarter that ended on September 30. The company, which makes optical components for communications and also solar cells for space and concentrated photovoltaics (CPV), included the prediction as it re-filed adjusted financial results following an accounting review.

The Albuquerque-based firm reckons that it will post revenue of around $55 million for the quarter ended September 30, a total that would represent a sequential increase of approximately 17 per cent.

Emcore decided to re-state its accounts in order to review a write-down of inventory, as well as make an allowance for what it has described as a “doubtful” sales account valued at $2.4 million. The company has also had to swallow a $2.8 million fee relating to its aborted attempt to set up a joint-venture with the Chinese investment group Tangshan Caofeidian Investment.

In late June, that plan was vetoed by no less an authority than the White House, when the high-powered Committee on Foreign Investment in the United States (CFIUS), chaired by the Secretary to the Treasury Tim Geithner, decided that the deal represented a threat to US security.

Since then, Emcore has announced plans for another joint venture with a Chinese company – this time San’an Optoelectronics – with which it will set up “SunCore” to manufacture high-efficiency solar cells for CPV applications. The plan is part of Emcore’s long-held strategy to separate its solar and fiber-optic business units, but which appears to have been complicated by the company’s supply agreements for sensitive space applications, where its solar cells are used to power satellites.

Warning notice
Partly because of all that uncertainty, Emcore was forced to delay the publication of its latest financial results – for which it received a warning notice from the Nasdaq stock exchange. Now released, those results show that Emcore made revenues of $46.6 million in the quarter that ended on June 30 – approximately one-third from photovoltaics and two-thirds from fiber-optics.

Although significantly higher than the $38.5 million posted for the same period of 2010, Emcore is still losing money. It made an operating loss of $8.3 million during the June 2010 quarter, although that was a far better result than the equivalent period last year, when it posted a net loss of $45.4 million.

In what has been a difficult period for the company, a Presidential review of a recent decision by the US International Trade Commission (ITC) also went against Emcore. In July, the ITC had issued a final determination following a case brought against Emcore by rival Avago Technologies, deciding that Emcore was infringing Avago’s intellectual property. As a result, the ITC prohibited US imports of certain VCSEL-based products infringing Avago's US patent 5,359,447. 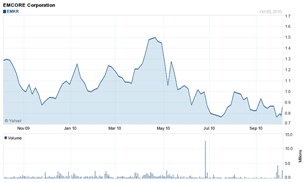 That determination was reviewed and approved by President Obama’s office on September 10, thereby prohibiting further importation of the infringing products – although the order does not apply to any of the products sold by Emcore’s customers that may contain infringing products, and did not include any financial penalty. As a result of that decision, Emcore has worked to re-design the offending products, and qualify them with its customers.

As of June 30, Emcore had $14.4 million in cash and cash equivalents listed on its balance sheet, along with liabilities including $10.9 million in borrowings from its credit facility.

Not surprisingly, the recent difficulties have had a negative impact on Emcore’s stock price. That price was relatively un-moved in early trading after the results announcement, with the company valued at around $0.88 per share, equivalent to a market capitalization of about $74 million. But, having traded below $1.00 for much of the past quarter, Emcore may find itself receiving further warning letters from the Nasdaq authorities if the price does not rise to $1.00 or higher over the next few months.