Lithography and laser annealing system supplier anticipates rapid growth in sales of its stepper tool to LED manufacturers next year. 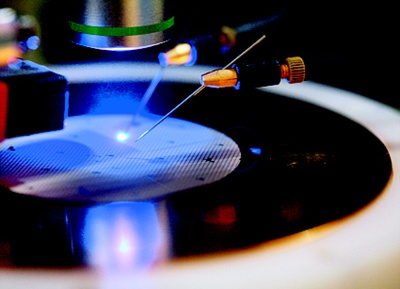 California-based Ultratech is anticipating a strong start to 2011, as orders for its laser spike annealing and lithography steppers continue to gain momentum. In particular, it expects to sell dozens of Sapphire 100 stepper systems to LED chip manufacturers next year, and will add capacity at its sites in San Jose and Singapore to meet what it described as “incredibly strong demand”.

The company posted sales of $37.9 million and net income of $4.9 million in its third fiscal quarter of 2010, up from $31.6 million and $3.6 million respectively in the second quarter, while its order backlog has now been rising for more than a year.

LED potential
But it is the potential of the high-brightness LED market that appears to have Ultratech’s management most excited about 2011 and beyond. With a strong desire from LED makers to improve device yields and wafer throughput, to ultimately reduce the cost of each lumen emitted by their LED chips, Ultratech’s lithography stepper promises to do just that.

Unlike silicon logic device manufacturers, who converted to stepper lithography many years ago, most LED makers still use aligner systems to produce the patterns that define their chips. Steppers from the likes of ASML, Canon and Nikon are too expensive for LED makers to justify buying, but with a sale price of less than $1 million per system, Ultratech’s steppers are now becoming affordable.

So much so, says Zafiropoulo, that Ultratech cannot meet the strong demand pull from its customers. According to the CEO, now that the tool has proved its ability to increase yields, LED manufacturers have made the decision to switch from aligner to stepper lithography faster than any other device makers in the past. That may be partly due to a widespread move by major LED producers to the 4-inch wafer sizes that are compatible with Ultratech's systems.

Special glass
But because the systems incorporate a special optical glass that requires extensive annealing, there is a nine-month lead time on orders. Ultratech has ordered the necessary glass over the past few months, but it will be early 2011 before system capacity can be ratcheted up to the required level. And despite recent suggestions that the year-long boom in sales of metal-organic chemical vapor deposition (MOCVD) reactors – the most critical piece of equipment needed for volume LED production – is beginning to wane, Zafiropoulo does not see this trend impacting sales of Ultratech steppers:

“We expect to double, or even triple sales of steppers for high-brightness LED in 2011,” said the CEO, adding that, over the next decade, he expects as many as 1000 Ultratech systems to be installed by LED manufacturers, with sales peaking at around 150 systems per year by the middle of the decade. From the end of 2011, the company should have enough capacity to ship 100 such systems per year.

With image sensors another growing application area for the company, this diversification of its customer base beyond the traditional silicon semiconductor industry should ensure that Ultratech continues to make good progress in 2011, even if the capital expenditure spree upon which the silicon industry has embarked over the past nine months begins to peter out.

Ultratech is expected to issue financial guidance for 2011 at its annual analyst day, being held on Wednesday, October 25.