The LED manufacturer has once again posted record revenue figures, but expects them to level off in the coming quarter.

Cree, the North Carolina company that is one of the world’s leading producers of LED chips and components, delivered record total revenues of $268.4 million in its first fiscal quarter of 2011, which ended September 26.

Sales of LED products grew only 2 per cent sequentially from the preceding quarter to reach $244.4 million (Cree also sells power and RF semiconductors, making up the other $24 million), but the growing demand for high-brightness LEDs is shown vividly by comparison with since last year’s revenue figures:

In the opening quarter of its fiscal 2010, Cree made LED product sales worth $156 million, meaning that LED sales have increased by some 57 per cent over the past 12 months.

Despite the strong performance in the latest quarter, which landed the company a net profit of $58 million, investors appeared disappointed with a Cree’s outlook for the forthcoming period. CEO Chuck Swoboda announced a target revenue of between $270 million and $280 million for the December quarter and continued strong profits, but the company’s stock price dropped by more than 7 per cent in early trading following the announcement, after downgrades from both Bank of America and Morgan Stanley analysts. 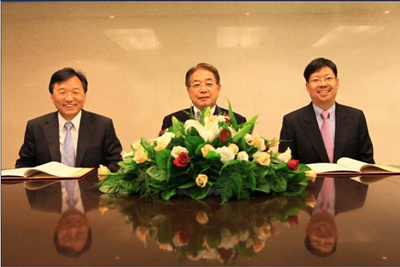 Market strength
That does not appear to reflect any particular weakness across the wider solid-state lighting market, however. Analyst company Strategies Unlimited maintains that the market for high-brightness LEDs will grow 68 per cent this year. And although that growth largely results from the widespread incorporation of LEDs in TV backlights, general illumination is now a key business driver - in 2009, this market segment was worth $665 million, more than 10 per cent of the total market for high-brightness LEDs.

Meanwhile, Cree is pushing ahead with plans to move wafer production onto a larger, 6-inch format, which will more than double the available area on each wafer for chip production. Within the past week, the company has also released a new line of high-voltage LED bulbs designed for solid-state lighting applications.

Fellow top-tier LED makers Epistar Toyoda Gosei of Japan and Taiwan-based Epistar are also pushing ahead with plans for a new joint-venture that is set to begin operations in early November. Called “TE OPTO”, the venture is majority-owned by Toyoda Gosei and will develop, manufacture and sell LED products for general lighting applications. The company has a sales target of ¥5 billion ($62 million) for the fiscal year starting in March 2011.

The joint venture agreement follows a recent cross-licensing deal signed by Toyoda and Epistar that allows the two companies access to each other’s AlGaInP (red, orange and yellow) and InGaN (blue, green and white) LED technologies. Epistar is the only company in Taiwan – the world’s major LED manufacturing hub – to gain the right to use Toyoda's intellectual property.

“Epistar and Toyoda Gosei each intend to maintain a friendly business relationship and pursue the development of superior high-luminosity LEDs and further expansion of the LED market through fair competition,” said the two companies at the time.