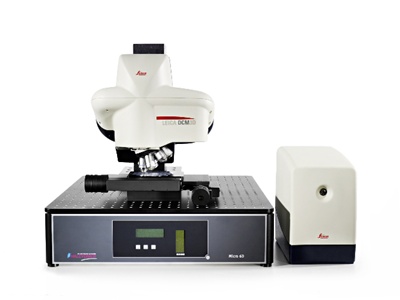 The two companies had previously worked together on the development of Leica’s versatile Leica DCM 3D system for sophisticated optical profiling. The systems are able to characterize surface topologies ranging from the sub-millimeter range right down to the nanometer scale, making them suitable for a wide range of applications in both research and quality assurance environments.

Under the terms of the agreement, Sensofar, a spin-out from the Technical University of Catalonia in Barcelona, supplies core optical technology that combines interferometric and confocal profiling techniques. That allows a user to combine visual observation with spectroscopic reflectometry, enabling thin-film and multi-layer measurements.

According to Sensofar, it is the clever use of a Forth DD microdisplay in the optical path that provides this level of flexibility - without compromising the performance of any of the optical techniques employed.

Combination tool
The combination of techniques within a single system means that it can characterize all sorts of microscopic surfaces, whether they are rough, smooth, stepped or structured. For the confocal part of the tool, high magnification (up to 150x) objectives with a numerical aperture of 0.95 allow the measurement of smooth surfaces, even those with steep local slopes of more than 70° inclination. The phase-shift interferometer mode can then be used to measure sub-nanometer height profiles.

Because it uses the fast-switching microdisplay approach, the Leica tool features no moving parts. Two high-power LEDs are used inside the optical system. A white emitter provides color confocal images, while a blue device is used in high-resolution confocal mode. The 460 nm wavelength of the blue LED enables lateral resolution of 0.15 µm and vertical resolution of 0.1 nm.

Applications of the tool, which has been available from Leica since 2008, are many and varied – ranging from life sciences to electronic device characterization, for example to characterize solar cell quality, where defects in the material can ultimately lead to failures.

Sensofar, which was founded in 2001, launched its first series of confocal optical profilers later that year. It introduced the proprietary dual-core technology, which provides the combination of confocal and interferometric profiling techniques, in 2004, and began its technological partnership with Leica in 2009.

The company also holds the vice presidency of the Southern European Cluster in Photonics and Optics, which was set up in 2009 by a group of companies and research centers aiming to improve the competitiveness of the optics and photonics sector in Spain – estimated to be worth €1.4 billion and employ some 7500 people in 2007.