Philips plugs OLEDs into the mains

Advanced design should aid route to commercialization for OLED luminaires by doing away with need for power management circuitry. 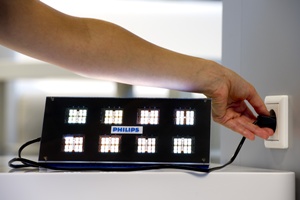 Philips has developed an organic LED (OLED) module that is the first to be powered directly by mains electricity.

The giant lighting and electrical goods company says that the approach, which is the result of a research project funded by the German Federal Ministry of Education and Research (BMBF), should ultimately reduce the cost of OLED lighting and help the technology to find mass-market appeal.

It has released few details about the OLED lamp's output, except to say that it operates at the conventional 230 V wallplug voltage.

“Until now, the physical characteristics of OLEDs have meant that they have had to be powered from low-voltage, direct-current sources,” explained the company. “We have combined proprietary interconnect and packaging technology to create this demonstrator.”

Mains-powered lamps based on conventional inorganic LEDs are just starting to become a commercial reality, as evidenced by a series of recent product releases by many of the major lighting companies.

Technical issues
OLED technology, which produces a much more diffuse light than the point source illumination of conventional LEDs, is desirable for large-area general lighting in novel forms, such as flat ceiling panels. However, OLED lighting is at a much earlier stage of development. Although OLED panels have been shown to have very high efficiency, issues that are still to be resolved include their overall brightness, which is relatively low, and their useful lifetime when driven at high currents.

During a panel session at the recent SPIE Optics + Photonics event in San Diego, US, Marten Sikkens from Philips Lighting and Franky So from the University of Florida agreed that there were many technical issues to be resolved before OLED lighting could become a commercially viable product.

Although OLED lighting is certainly efficient, it lags well behind in other criteria, said Sikkens. Overall luminance of OLEDs – the number of candelas emitted per unit area – is in particular need of improvement, while So said that the “droop” problem of diminishing efficacy at high drive currents appeared to be even worse for OLEDs than it is in regular LEDs.

Another crucial element that requires addressing is the absence of anything resembling an industry supply chain for OLED lighting at present. In particular, the development of high-volume production systems to manufacture OLEDs remains at a very early stage.

Nevertheless, by eliminating a lot of the components that would previously have been needed for an OLED luminaire, the prototype AC-OLED lamp developed by Philips represents a key step towards commercialization.

Philips, which has been working on OLEDs for nearly two decades, does already have a commercial product available in the form of Lumiblade – a large-area, diffuse light source for novel display and lighting applications. These products are manufactured at Philips’ dedicated OLED center in Aachen, Germany, which Philips claims to house the world’s first-ever OLED lighting production line.