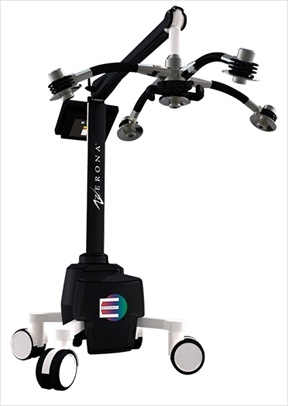 Erchonia Medical, a Texas-based specialist manufacturer of low-level laser technology, has been granted market clearance by the US Food and Drug Administration (FDA) for its ‘Zerona’ product, a so-called “non-invasive body contouring device” that reduces the circumference of a patient’s waist, hips, and thighs.

The FDA granted Erchonia market clearance following a successful placebo-controlled, randomized, double-blind, multi-site clinical investigation involving 67 people. Study participants lost on average 3.65 inches around their waist, hips and thighs in as little as two weeks. According to Erchonia, the clinical trial did not have any diet restrictions or exercise requirements in order to show the clinical ability of the Zerona and set a precedent on how aesthetic devices should be evaluated in future.

“Zerona has been clinically proven to target fat cells causing their immediate collapse thereby significantly reducing body volume,” claims Erchonia. “Through a natural process of fat removal, the laser-released fat is safely removed and broken down, providing patients with a truly non-invasive procedure without side effects or downtime.”

Other 510(k) approvals
Under section 510(k), medical device manufacturers are required to submit a pre-market notification if they intend to introduce a device into commercial distribution for the first time, or reintroduce a device that will be significantly changed or modified from previous versions. Recent approvals by the FDA include:

Solta Medical has just received FDA 510(k) clearance of its Fraxel re:store Dual for the treatment of actinic keratosis (AK), a common pre-cancerous skin condition caused by sun exposure. According to the company, the Fraxel re:store Dual is the first product in the aesthetics market to make use of a thulium laser emitting at 1927 nm.

During a six-month clinical study of 21 patients there was an average 83.5% reduction of AK lesions using 1927 nm light. "We continue to develop safe, innovative anti-aging solutions that deliver the best possible results in non-invasive aesthetic treatments," said Stephen Fanning, President and CEO of Solta Medical, Inc. "With the FDA clearance of our Fraxel re:store Dual system, we are providing our physicians with cutting-edge technology that patients are seeking, specifically in terms of reversing sun damage and treating precancerous skin lesions."

Clinicians involved in the study were equally positive. "By using the 1927 nm wavelength, we were able to see dramatic clinical clearing of facial AKs in our patients after a series of treatments," said Suzanne Kilmer, Founder of the Laser & Skin Surgery Center of Northern California, US. "My patients will now have an effective and safe treatment option for the removal of precancerous lesions on their face as well as on the body."

Focus Medical, a US-based developer of laser technology for cosmetic surgery, has been granted approval to market its NaturaLase 980 laser system. The product is based on a diode laser emitting at 980 nm and will be targeted at applications such as dermatology and plastic surgery where the ablation, vaporization and coagulation of soft tissues is required.

The FDA concluded that the specifications, indications for use and performance of the NaturaLase 980 were substantially equivalent to legally marketed predicate devices and raised no new issues of safety and effectiveness. Focus Medical already sells a range of laser-based systems. Examples include the NaturaLaser1064, an Nd:YAG laser for hair removal and the NaturaLase ER, an Er:YAG laser for skin rejuvenation and resurfacing.

Also cleared was the StarTrol LED lighting system from Huot Instruments, which is designed to provide an illumination field for general examination and minor surgery. The lighting head comprises four LED clusters, each containing three LEDs such that the intensity of the overall illumination can be varied. Huot believes that LED-based examination lights such as its StarTrol will use less than one third of the power of equivalent products based on halogen bulbs. In its technical datasheet, Huot quotes a color temperature of 4113K, a color rendering index of 94 and a total irradiance of 59.6W/m2.

Chinese company Foshan Gaunying Electronics was given approval in August to market an infrared lamp designed to temporarily elevate the skin’s temperature and provide relief from muscle and joint pain. The lamp emits between 600 and 2000 nm and a typical treatment time is expected to be around 15 minutes.