The UK company's North American operation is to lead development of a blue laser system for high-speed, covert submarine communications. 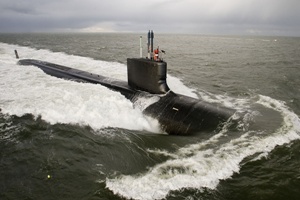 QinetiQ’s North American subsidiary has won a contract worth $31.8 million to develop and build a blue laser system for covert communications between a submarine and aircraft flying overhead.

The US Defense Advanced Research Projects Agency (DARPA) has made the award under its Tactical Relay Information Network (TRITON) program, with a live evaluation of the system scheduled for a key naval exercise taking place in mid-2012.

QinetiQ, which was spun out of the UK’s Ministry of Defence ten years ago, and remains headquartered in the UK, is already working on a blue-laser communication system known as “SEADEEP” – short for Submarine-Enabling Airborne Data Exchange and Enhancement Program. That system can be carried by an unmanned aerial vehicle (UAV) to support submarines.

Unconventional means
Submarine communications have always been problematic, largely because radio waves are unable to penetrate sea water. As a result, links between submarines and other warships or airplanes have had to rely on unconventional means such as trailing wires or towed buoys – compromising the ability of a submarine to remain stealthy.

However, blue and blue-green laser wavelengths penetrate sea water very effectively, and this technology has long been seen as a way to improve submarine communications. One of the key technological stumbling blocks has been the laser transmitter. To produce the high-energy blue beams required for effective communication has previously required a Raman-shifted XeCl excimer laser, or a frequency-doubled Ti: sapphire source, both of which are regarded as too bulky, inefficient and impractical for the application.

But now that DARPA has developed blue solid-state lasers and cesium atomic line filters (ALFs) to produce emission at 455 nm and 459 nm, the Agency feels that the key component technologies are sufficiently advanced to feature in an operational defense system.

Of its “SEADEEP” system, QinetiQ claims that the approach has already “demonstrated communications through the air-water interface equivalent to data rates available with wideband Internet communications at home”. Such speeds would be hundreds to thousands of times faster than conventional submarine communications at depth, the company adds.

Project milestones
DARPA’s previous efforts on the topic include its Blue Laser for Submarine Laser Communications (SLC) and Non-Acoustic Anti-Submarine Warfare (ASW) program headed up by Larry Stotts – under which the solid-state 455 nm laser was developed.

Under Phase 1 of the new TRITON program, which runs until September 2011, the first milestones include the development of multiple blue laser transmitter modules and cesium ALFs. These are due in April 2011, with development of the laser uplink and downlink laser systems and receivers running in parallel.

Final prototype system checks are due by October 2011, after which Phase 2 will see a switch to focusing on system installation, with a laser transmitter on both the submarine and the communicating aircraft. Those tests will take place at San Clemente Island in southern California, before a wider Fleet evaluation currently scheduled for late June 2012.

“By program completion, DARPA and the Navy are expecting a clear demonstration of the maturity of key laser technology components and its performance as a future operational system,” says DARPA in its Broad Agency Announcement (BAA) for the TRITON program. “The key event in this BAA is participation in the Rim of the Pacific (RIMPAC) 2012 Fleet Exercise in June 2012.”