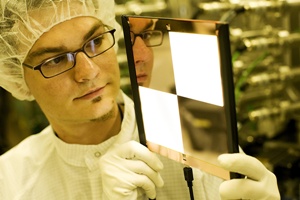 The Phase II SBIR award is focused on the development of “ultra-high-efficiency” phosphorescent organic LEDs for lighting applications. The aim is to produce a white-light source operating at 120 lm/W by improving out-coupling of light from the OLED structure through high-index substrates and low-voltage operation.

The project will also make use of new phosphorescent host materials that are matched energetically to transport layers.

UDC’s researchers will fabricate square 15 cm panels using various designs, to study thermal impacts in detail. The end result should be lower-temperature operation, which will in turn help to extend OLED product lifetimes.

Light extraction
In the other Phase I project, UDC is addressing problems with light extraction. At the moment, relatively bulky extraction units are needed to deliver high-efficacy OLED lighting panels, detracting from the overall appearance and making the technology more costly to produce and ship. Under the new project, UDC will develop low-cost, thin materials for improved light extraction.

Founded way back in 1994, UDC’s business model is largely based on technology licensing and transfer activity, although it does also sell high-performance OLED materials.

Last month, the company reported a net loss of $4.4 million on revenues of $8.5 million in its latest financial quarter, although things are expected to improve. At the time, company CFO Sidney Rosenblatt indicated that demand for active-matrix OLED displays was outstripping supply, meaning good news for UDC.

“Manufacturers are in the process of significantly expanding their capacity for small-area OLED display applications, and migration to larger-format displays is expected,” said Rosenblatt. “In addition, the development of white OLED lighting should create another exciting market opportunity for our technology and materials.”

The DOE announced a further four awards, in addition to those received by UDC. These included SBIR grants awarded to ORBITEC for solid-state lighting in agricultural applications; to Advanced Cooling Technologies for a dielectric printed circuit board for use as an advanced heat spreader; and to Luminus Devices for more efficient AC-DC conversion to drive large-area LEDs.

The one STTR awarded by the DOE this time around went to Sinmat, which will develop a low-cost microlens engineered substrate. The idea of this award is to improve light extraction at substrate interfaces by eliminating waveguided modes inside the substrate material and active layers.