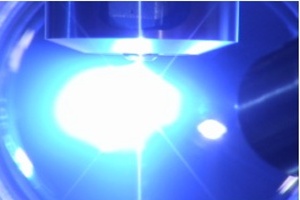 The latest award, which follows on from $189k in Phase 1 funding, is designed to support the company’s development of a high-power source that may eventually be used in next-generation lithography equipment.

Arbor’s high-power fiber lasers are based on a new type of optical fiber. The so-called “3C” structure, which was developed at the University of Michigan’s Center for Ultrafast Optical Science, allows a large-core fiber to produce a powerful output in a single spatial mode.

3C stands for “chirally coupled core”. According to its inventor, Almantas Galvanauskas from the University of Michigan, the curved structure employed in the fibers means that there is a strong loss in the helical side core, and only the LP01 mode can propagate in the central core.

Using the NSF award, Arbor is aiming to achieve nanosecond-pulsed laser output with an average power of 200 W in the 1030-1090 nm wavelength range. Arbor has already shown that 3C fiber with a central core diameter of 35 µm can support peak pulsed powers in excess of 100 kW, but to meet the next goal it will scale the core diameter to at least 50 µm.

Next-gen lithography
Ultimately, Arbor is aiming to develop a module that will be capable of producing a plasma that is suitable for extreme UV (EUV) lithography applications.

EUV will be used in the next generation of lithography equipment for high-performance semiconductor production. Although the development of the technology has hit many stumbling blocks over the years, systems suitable for pilot production are now being shipped. The market-leading lithography systems company ASML recently announced that it had orders to ship six pilot EUV systems, and is working closely with laser systems company Cymer to fully develop the next generation of equipment.

One of the key problems that is holding back EUV lithography right now is power of the EUV source that is required. Pre-production systems with 100 W sources are expected by next year, but to deliver sufficient power to support industrial wafer production at a rate of 125 wafers per hour, a 250 W source will be needed. The 2009 International Technology Roadmap for Semiconductors suggests that those production systems should be in operation by 2016.

Reaching that level of EUV power requires extremely high-power laser lasers, fired at droplets of tin that in turn produce the EUV radiation. Current EUV systems use a carbon dioxide laser to produce the plasma, but Arbor’s developments suggest that fiber laser technology might deliver the kind of scalability that is always required in semiconductor production.

Arbor says that by spectrally combining a number of closely spaced laser channels it could produce a single beam of nanosecond pulses with an average power of several kilowatts – enough to support the requirements of a production EUV system.

“Successful completion of this project would provide a technology to extend photolithography for feature sizes below 22 nm,” says the company. “Currently available laser technology can deliver only one-third of the power required for high-volume manufacturing by EUV lithography.”