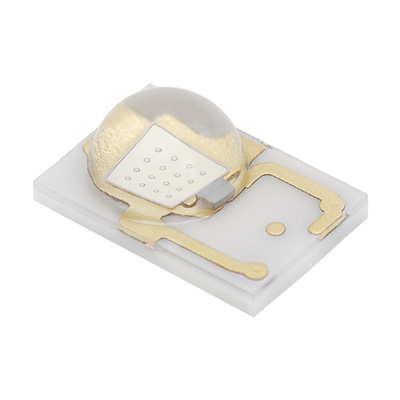 High-brightness white LEDs are fabricated on wafers, using a set of manufacturing processes analogous to those used in the silicon semiconductor industry. The crucial difference is that most white LEDs consist of gallium nitride (GaN) deposited on top of a sapphire substrate. Until recently, virtually all of these LEDs have been produced on 2-inch or 4-inch wafers.

Now Rubicon Technology, a US provider of sapphire wafers, says that one of its major existing customers has placed a $71 million order for 6-inch material. The order represents the first large-scale supply agreement for sapphire at this size for LED production, and will enable far more LEDs to be manufactured on a single wafer.

“This contract is very exciting for Rubicon," said Rubicon’s CEO, Raja Parvez. "While we have been supporting several LED customers in their development efforts on six inch substrates, this is the first LED chip manufacturer to move into volume production on this size material.”

With a surface area more than double that of a 4-inch wafer, it is possible to make more than 100,000 LEDs on each 6-inch wafer, and moving to the larger scale is a key element of the drive to make LEDs chips, and therefore solid-state lighting (SSL), a more competitive technology.

Rapid expansion
The scale of the order dwarfs any of Rubicon’s existing supply agreements, and also indicates the rapid expansion of the LED industry at present. In its latest financial quarter, the company reported total sales of $15.8 million, up 37 percent sequentially. On its own, the $71 million order represents an average quarterly run-rate of $15 million.

The LED chips made on Rubicon’s 6-inch platform are expected to be used to backlight televisions and displays, as well as feature in SSL products at a later stage. In the past year, the LED industry has experienced an unprecedented boom in demand, as TV backlight applications have skyrocketed.

According to Ross Young, an analyst at IMS Research, demand for LEDs used in display backlights will grow at a 30 percent CAGR through 2015 to reach 100 billion die. Young also expects the LED lighting market grow five-fold between 2009 and 2010.

As one of the few sapphire companies that is able to produce large-scale sapphire with the requisite qualities for high-brightness LED production, Rubicon is benefitting from a constrained supply chain that is unable keep up with rampant demand. Parvez confirmed that in the latest quarter, this continued to be the case: “We continued to dramatically increase gross margin and earnings per share in the quarter through increased pricing, improved product mix, and operational efficiency,” he said.

The strong demand enabled Rubicon to increase pricing on its sapphire substrates by 16 percent on average over prices in the prior quarter – equivalent to a staggering 80 percent annual price rise if it continued for four straight quarters.

A similar increase certainly looks likely in the current quarter. Commenting on the company’s outlook, William Weissman, Rubicon's CFO, said: “We see an even stronger pricing environment in the third quarter and expect our substrate prices to increase by at least 20 percent on average sequentially. We estimate revenue for the third quarter will increase to approximately $19.5 million.”