Four new power plants are to be installed as part of UA's Solar Zone, which will become the largest multi-technology solar evaluation site in the US. 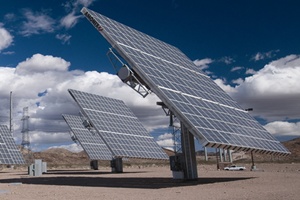 The Solar Zone at the University of Arizona’s Science & Technology Park (UA Tech Park) is to expand its generating capacity to nearly 20 MW, following the approval of four new projects to provide 14 MW peak power.

With approval granted by the Arizona Corporation Commission on August 24, the partnership with Tucson Electric Power (TEP) is set to move into its site construction phase starting September. When completed, the site will be one of the world’s largest test-beds for solar technologies, allowing TEP to evaluate the different types of systems being constructed.

The latest projects to receive the go-ahead include a pair of 2 MW concentrating photovoltaic (CPV) installations, to be supplied by Amonix Solar and Emcore, and two 5 MW installations based on more conventional PV technologies. The site also includes a 5 MW concentrating solar thermal facility provided by Bell Independent Power Corporation.

Funding for the individual projects is provided by the companies, with the total aggregate cost of the development estimated at between $80 million and $100 million.

According to UA Tech Park, preparation of the 222-acre site will be completed by the end of this year, with the first installation expected to be online by mid-2011. The whole Solar Zone project is expected to be fully operational some time in 2012. 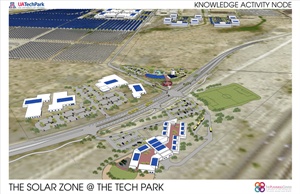 Multi-technology test-bed
UA Tech Park is aiming to establish the Solar Zone as the largest multi-technology site for solar technologies in the US, building on UA’s long-standing expertise in optical technologies and the near-ideal local weather conditions for PV generation, and CPV in particular.

Ultimately, the PV systems being constructed are expected to generate sufficient energy to power nearly 5000 homes in Tucson.

Chris Larocca, the COO at Emcore, said of the company’s 2 MW installation: “The Tucson environment is well-suited for Emcore’s CPV systems. Tucson Electric has been very aggressive incorporating innovative technologies into its renewable energy portfolio.”

According to many analyst reports, the US will become one of the fastest-growing markets for photovoltaic energy generation over the next few years. The European Photovoltaic Industry Association estimates that the US had an installed PV capacity of only 1.65 GW at the end of 2009. But that figure is expected to rise quickly over the next five years, reaching up to 18 GW by 2014 - assuming that favorable policies for PV are maintained.

"With the immense potential of US territory and the strong commitment of President Obama regarding renewable energies, the US could represent a GW [annual] market already by 2010," said the EPIA in its latest report.

The south-western region of the US, including Tucson, is particularly suited to CPV technology, given its dry climate and clear skies. Amonix, whose CPV systems are based on plastic Fresnel lenses, is building CPV manufacturing capacity at a facility in Nevada with the aid of Department of Energy tax credits. By the end of 2011, the eight production lines at the facility are expected to ramp up to a capacity of 240 MW annually.