Canadian specialist in high-concentration photovoltaics will use proceeds to buy key components for upcoming projects. 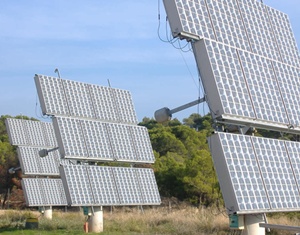 OPEL International, a photovoltaic systems company based in Toronto, Canada, has raised $7.55 million in a round of private financing.

According to the company, the additional capital - from an unspecified source - will allow it to build out the necessary inventory to supply a growing backlog of concentrating photovoltaic (CPV) solar projects.

Each of OPEL’s high-concentration modules relies on two refractive optical elements to focus sunlight onto a high-efficiency, triple-junction solar cell supplied by the Boeing subsidiary Spectrolab. These modules are then combined into arrays on two-dimensional trackers.

Although the compound semiconductor cells and multi-axis trackers required are much more expensive than conventional silicon cells and simple tilting systems, the combination of a cell efficiency close to 40 percent and high concentration means that, in certain climates, the approach can be more cost-effective than conventional photovoltaics. This is particularly the case for utility-scale solar farms, but so far the technology is yet to prove itself commercially in any large installations.

"Investor belief"
“The investors in OPEL have clearly affirmed their belief in our ability to deliver solar energy at the utility scale level,” said OPEL’s CEO Leon Pierhal of the latest funding round.

OPEL is so far known to have installed three HCPV systems in Tarragona, near Barcelona, Spain, with a combined peak output power of 330 kW, and a smaller system in Connecticut, US. However, OPEL has stated that in the next 18 months it foresees a significant increase in revenues, with up to 100 MW of installations in the pipeline.

Michael McCoy, OPEL’s CFO, said in June, “OPEL is definitely at a turning point and should grow dramatically in the next 12 to 18 months.”

The CPV market in general appears to be at a crucial point in its evolution, with a number of multi-megawatt projects expected to be built around the world in the next year or so.

The technology is suited to climates with high insolation and a lack of cloud cover, meaning that locations in the Mediterranean, the south-western US and Australia are being targeted by CPV companies.

Proponents of CPV believe that the approach will also become viable in less sunny climates as the cost of high-efficiency cells declines, although much of the solar industry remains highly skeptical. Detractors suggest that the relatively complex technology (compared with flat-plate silicon and thin-film modules) is neither sufficiently robust for harsh outdoor conditions, nor scalable to the magnitude required to provide energy at a competitive price.

OPEL says that key relationships with energy providers Bechtel Power, ABB and CME Energy have been forged over the past year, with CME selecting OPEL’s US subsidiary to supply high-concentration panels and trackers for a 30 MW installation at an unspecified location in the US Midwest.

At full output, a power plant of that magnitude would produce more electricity than all of the other CPV installations in the world combined.