Valued at $4.6 million, the award recognizes that NG surpassed the initial goals in the Agency’s “Revolution in Fiber Lasers” project (RIFL), managed by Joseph Mangano. The ultimate goal is to produce a lethal fiber laser weapon operating at 100kW. 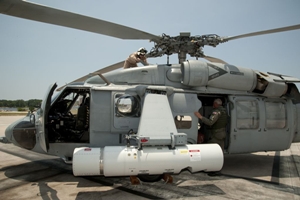 In the first phase of the project, NG used high-power amplifiers from Nufern, high-power laser diodes from Fraunhofer USA, and designs produced at the Johns Hopkins University to produce a high-quality 1kW beam.

Operating in single mode, the fiber amplifier showed a beam quality (M2) of 1.2 and an impressive electro-optic efficiency of 30% - double the targeted efficiency level.

Northrop Grumman told optics.org that the team selected 1 µm for the operating wavelength, as this is compatible with ytterbium-doped fibers - the most efficient available. These were pumped at 976 nm by diode emitters.

Other notable achievements included a polarization extinction ratio of 50:1, and a low phase noise. The latter is crucial for linking together a chain of lasers all operating coherently and capable of being scaled to a weapons-class output power.

The main challenge in the second phase of the project is to achieve 3kW output in a single mode fiber amplifier, while maintaining the kind of beam quality achieved so far.

To do that, NG will be employing techniques that it has patented which enable beams to be combined efficiently and with minimal loss of power, phase distortion or beam quality.

The other key requirement is for brighter pump sources, which have already been demonstrated by partners at Fraunhofer USA.

The RIFL project is not the only high-power laser development that NG is working on within the US military framework. The Joint Technology Office (JTO) has funded a 24-month, $8.7 million project called the Robust Electric Laser Initiative (RELI).

In this project, NG’s proprietary beam-combining technique, which is based on its two-dimensional diffractive optical element, is being used to increase optical output power to a planned 25kW.