After InVisage Technologies unveiled the first quantum-dot based image sensor, CTO Ted Sargent tells us why he believes silicon's light-sensing days are numbered.

Anyone who uses a mobile phone with a built-in camera will tell you about their love-hate relationship with the image sensor. Having a camera at your fingertips is the ultimate in convenience but you have to live with the limitations of a sensor made of silicon: colours not quite right and images not quite as sharp as you would like.

But this could all change, thanks to the release of the first quantum-dot based image sensor. Developed by start-up InVisage Technologies, QuantumFilm is fully compatible with existing CMOS manufacturing and could be deployed in mobile phones as early as next year. So confident is InVisage that it even goes as far as saying that QuantumFilm will be the de facto next-generation camera platform. 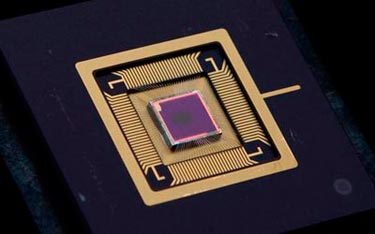 "Silicon was not put on this Earth to do light sensing but nothing could be better than silicon for low-noise low-cost electronics," Ted Sargent, InVisage's CTO, told optics.org. "In our design, silicon has no light sensing role and is only responsible for the electronics. We have designed a light-sensitive material and tailored it to suit our needs. Merging the two gives tremendous freedom to the electronics designer and at the same time solves the optical problems."

Market analysis
When InVisage was founded in 2006, the team knew that it had developed a very powerful material system and wanted to find the most urgent and commercially significant problem to solve with it.

"We rapidly landed on the mobile phone camera market. It was an area with an urgent need with a problem we could solve where there was a major commercial opportunity," commented Sargent. "The quality of the images that we take with our mobile phones is really not satisfactory and we knew we could make a major impact with our QuantumFilm. We understood the origins of the problems with existing image sensors and those are largely traceable to using silicon as the light sensing medium. We knew that QuantumFilm would allow us to address all of those limitations and ultimately produce better pictures."

Today, InVisage has raised over $30m in venture capital funding and employs 30 people at its headquarters in Menlo Park, California.

Substituting the silicon
The key to making all of this possible is quantum dots. Quantum dots are typically just a few nanometres in diameter and are made from a semiconductor material system. The small size of the particles is particularly important because it means that they are strongly quantum confined. As a result, a modest change in the particle's diameter changes its bandgap and consequently the wavelengths of light that it can absorb.

For InVisage, the aim was to create quantum dots capable of efficiently absorbing light across the visible spectrum. "Just like other semiconductors, what you are tuning in quantum dots is the onset of absorption and then they continuously absorb to the blue of that onset," explained Sargent. "We tune our bandgap to be a little to the red of the red and then we completely absorb all of the visible wavelengths using one material. Making the particles all one size is the way to ensure the transition between non-absorbing and absorbing is very sharp."

Although you could tweak the diameter of the quantum dots to maximize the absorption across the visible spectrum, Sargent says that this level of complexity is not necessary in the cameraphone application.

"We have such a compelling advantage just by making one size of particle that absorbs all visible wavelengths that we don't need to go any greater level of complexity," he explained. "As it stands, we are able to spin coat a single layer consisting of a single size of quantum dot of a single composition and use that layer to absorb all the visible colours. We simply put different colour filters on top of each pixel. The ease of processing and fabrication before the colour filter goes on is really straightforward."

QuantumFilm pixels
With the quantum dots in place, the final challenge for the InVisage team was getting the QuantumFilm to talk to the silicon in order for the image data to be read out. 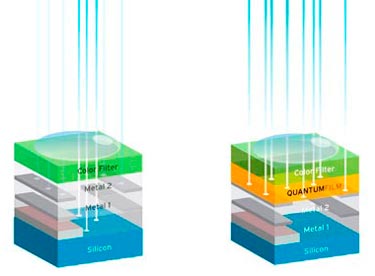 "We knew that the metal connections between the silicon and the QuantumFilm would be absolutely crucial," commented Sargent. "The metal to bias and read out our chip had to be the right quality. We had to work within existing processes to electrically contact and collect current from our materials but we succeeded in integrating CMOS silicon with QuantumFilm. It was a real question mark; no-one had integrated these two materials."

Comparing a typical cameraphone pixel with one containing a layer of QuantumFilm shows the leap in performance that has been achieved. With QuantumFilm, 100% of the area of a pixel is light-absorbing. As Sargent explains, QuantumFilm brings light sensing to the top of the chip.

"Light doesn't need to go inbetween all of the wires that constitute the electrical interconnect used in silicon circuits," he said. "Instead, we reach up to the light with our QuantumFilm and capture all of the light incident on the pixel. Designers of existing CMOS image sensors have to try everything they can to make their wires as narrow as possible. That is not an issue with QuantumFilm."

QuantumFilm also solves the problem of cross-talk between pixels. In the red part of the spectrum, silicon has to be many microns thick in order to absorb a reasonable fraction of the incident light. In contrast, InVisage says that QuantumFilm shows strong absorption across the entire visible spectrum using just a thickness of just a few hundred nanometres.

This is an important point in terms of cross-talk. Pixels today tend to be either 1.7 or 1.4 µm in size but if the amount of material that you need to absorb light in the thickness direction is greater than the lateral dimensions of the pixel then light starts to leak from one pixel into its neighbour. This manifests itself in the final image as colours looking noisy or not quite as true as you would expect. "QuantumFilm is strongly light-absorbing on a length scale that is much less than the lateral dimension of the pixel, so solves the issue of cross-talk," commented Sargent.

Rolling out the technology
InVisage plans to sample its first product at the end of 2010 and predicts that volume production could then take anywhere between 6 to 9 months to reach. This means that we could start to see mobile phones featuring QuantumFilm sensors as early as 2011.

"Because we are a start-up, we need to be focused," added Michael Hepp, InVisage's director of marketing. "The first application is the handset market. Once we make some headway there and some revenue and have a bit more time, we do intend to move into other imaging markets. We have the ability to move into many applications simply by changing the size of the quantum dots."