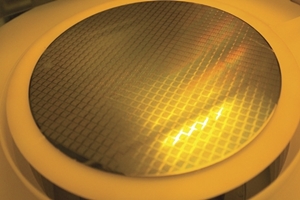 Under the agreement, Stion will license and transfer its CIGSS thin-film solar panel technology to TSMC, while TSMC will provide a set quantity of modules back to Stion. In addition, TSMC's venture capital wing, VentureTech Alliance, has taken a 21% stake in the US company.

Typically, the efficiency of CIGS panels have lagged that of crystalline silicon, the predominant solar panel material. However, recent developments in the laboratory have suggested that the gap may be closing.

"The collaboration enables Stion to scale its operations, leverages both companies' strengths to achieve market leadership and to deliver on the promise of efficient, affordable solar energy," said Chet Farris, President and CEO of Stion.

Stion's most recent datasheet quotes a module efficiency of 11.8% for its SN-130 modules, which are rated at 130W, and shows that thin-film technology is beginning to challenge c-Si on performance as well as on price.

Although CIGS and related compounds have been in advanced development for many years, the commercial solar market remains dominated by c-Si suppliers and First Solar, which provides CdTe panels.

The move by TSMC is the latest foray into "clean" photonics technologies by the giant foundry company, which produces billions of silicon chips every year. The company confirmed earlier this year that it would complete an LED manufacturing facility by the end of 2010, and begin producing LED chips in early 2011.

And in December 2009, TSMC had indicated its strategic thinking by becoming the largest shareholder in Motech, the largest solar cell manufacturer in Taiwan, in a deal valued at $193 million.

Unlike Stion, Motech's cells are based on the conventional monocrsytalline and multicrystalline forms of silicon, suggesting that TSMC is hedging its bets when it comes to photovoltaic materials.

Mike Hatcher is the Editor-in-Chief of optics.org