Despite impending reductions in feed-in tariff support for photovoltaic energy generation, market analysts at iSuppli do not expect a repeat of the pain seen in early 2009. 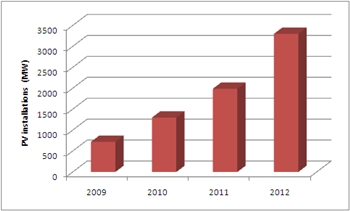 With feed-in tariffs (FiTs) in the key markets of Germany and Italy about to be reduced, and financial problems spreading around the Mediterranean, there has been speculation of an accompanying decline in demand for solar cells used to generate photovoltaic energy. Could we see a repeat of the crash witnessed in the first half of 2009?

According to analysts at iSuppli, the answer is “no”. Measuring global PV installations at 7GW for 2009, Henning Wicht and Stefan deHaan from the market research company have raised their forecast for 2010 dramatically, now suggesting that 13.5GW will be deployed this year.

Good investment conditions in Germany, which remains the single most important PV market, will prevail over the FiT reduction, they say. In addition, the halting of capacity expansion projects to increase module production will lead to capacity constraints in 2011.

The solar market is "hot" right now, the analysts said, having gone from slump to boom in just a few short months. Part of the reason for that fast recovery was that during the slump of early 2009, there was a huge oversupply of both polysilicon and solar modules based on silicon cells. The accompanying dramatic price drop helped to prompt demand.

As the supply-demand balance switches in favor of module vendors once again, it will not just be good news for the top-tier players. Third-party manufacturers such as Flextronics also stand to gain thanks to more out-sourcing.

"The oversupply of 2009 is at an end," said the analyst team, suggesting that both wafer and module capacity would be running at 95% utilization. 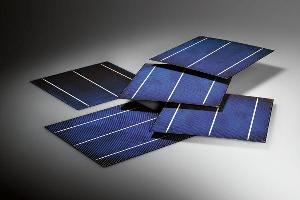 While previous expectations were for 2010 to be “front-loaded”, with installations peaking before FiT cuts, iSuppli now predicts a more convoluted picture that it describes as “W-shaped”.

Installations in Q1 of 2010 remained very weak at just 1GW, a hangover from the 2009 difficulties. In Q2, iSuppli reckons that some 5GW will be installed in the rush before the FiT changes in Germany. Demand will slump again in Q3, but recover in Q4 ahead of further FiT reductions.

Although strong, the demand in 2010 and 2011 is expected to be particularly "lumpy", which could create difficulties within the supply chain. There are also likely to be further shortages on a regional basis – for example in Q2 of 2010 modules were hard to come by the UK, as the German market mopped up all of the available supply.

Some 6.6GW of solar power are now expected to be installed in Germany in 2010 – accounting for roughly half of the global market.

And Germany will remain the leading regional market for the time being. However, the iSuppli figures now suggest that favorable federal and state rebates and tax credits in the US is incubating a future market that will soon challenge Germany as the world’s largest.

By 2014, the annual global market is forecast to have expanded to some 44GW – more than three times the “boom” year that 2010 is turning out to be. Over the course of the next five years, the only sticky period anticipated by the iSuppli analysts is 2012, when the cumulative reductions in Germany’s FiT will see a dip in demand in regional demand. Germany’s FiT rates are also dependent on the amount of PV capacity installed in each year, which is likely to skew installation rates.

By that time, more new PV markets are expected to add momentum. And while the suggestion of a booming future market in the UK might confound local residents more used to grey skies than blue, the same could not be said for the elevated plains of South Africa.

Silicon still dominates the solar scene, and will continue to do – but thin-film cells made from compound semiconductors are chipping away at that bias. With NREL's recent confirmation of a 13.8% efficiency standard cell produced by CIGS specialist MiaSole, it is clear that the newer materials are beginning to challenge crystalline silicon in terms of energy production as well as cost.

iSuppli’s estimate is that global thin-film cell capacity is currently running at about 0.8GW per quarter (nearly half of which is provided by market-leading First Solar), behind the cumulative 3-3.5GW per quarter capacity of c-Si producers.

Mike Hatcher is Editor-in-Chief of optics.org