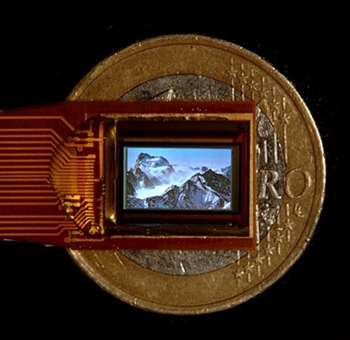 Photonis Technologies has made a strategic investment into organic light-emitting diode (OLED) displays.

The Merignac, France, manufacturer of military night vision technology and sensors for medical imaging has purchased a 51% equity stake in fellow French company MicroOLED, which is based in Grenoble.

MicroOLED produces high-performance microdisplays that are typically used in head-up applications by soldiers, but which are also suitable for consumer applications such as glasses showing high-definition or 3D video content.

Based on organic LED technology developed in conjunction with research laboratories at Thomson and CEA-Léti, the novel microdisplays may find additional applications.

Key advantages of the technology, claims MicroOLED, include a low operating voltage only half that of comparable state-of-the-art displays; low thermal dissipation, attributed to the conductivity of the charge-transport layers in the device; and a resulting energy efficiency far in excess of similar displays.

Those similar displays, such as the “CyberDisplay” products sold by US rival Kopin, are typically based on liquid-crystal technology.

MicroOLED says that near-eye LCDs suffer from low optical transmission, limited resolution and a relatively high power consumption – characteristics that inevitably result in a trade off.

For example, the LCD pixel size can be reduced, but this comes at the cost of lower optical transmission. A brighter backlight and more complex optics can be used to counter that problem, but only with the result of higher energy consumption and added cost.

The level of investment from Photonis, which was not quantified by either company, is said to be sufficient to enable to MicroOLED to add to its manufacturing capacity, while the company will also be able to exploit Photonis’ much wider sales and marketing network.

MicroOLED was started up in 2007 by two former CEA-Léti researchers, after Thomson decided to close its displays division in Rennes, which had been developing the organic LED technology since 2000.