Component chief in bullish mood after posting record sales for both the closing quarter of 2010 and the full fiscal year. 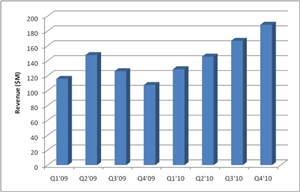 Fiber-optic component maker Finisar posted record revenues and swung back into profit in fiscal year 2010, despite the global recession.

Thanks to its acquisition of Optium and a surge in demand for components needed to upgrade both wireline optical networks and wireless backhaul, Finisar swung from a net loss of $260.3 million in fiscal 2009 to a net profit of $14.1 million for the year ended April 30, 2010.

“The continued strong demand for mobile bandwidth and the need to upgrade existing networks and build out new backhaul networks...has powered Finisar to record levels,” Rawls announced. “Fiscal 2011 will be another record year for us.”

For the full year, the Californian corporation set $629.9 million as its revenue target to beat next term, up from $497.1 million in fiscal 2009.

Having taken advantage of favorable market conditions in early 2010 with a public offering of stock, Finisar also has a much healthier-looking balance sheet right now.

As of April 30, the company listed $207 million in cash and other liquid assets – thanks in no small margin to the $131.1 million net proceeds it raised through the March sale of its common stock.

The explosion in consumer demand for mobile bandwidth has in turn driven demand for components supporting network speeds in excess of 10 Gb/s, which increased 82.2% year-on-year.

Finisar manufactures its photonic products at a pair of advanced fabrication facilities in the US: VCSELs are fabricated at its site in Allen, Texas, with distributed feedback (DFB) and Fabry-Pérot lasers produced at the Sunnyvale, California, headquarters.

But the hottest products in Finisar’s portfolio are now reconfigurable optical add-drop multiplexers, or ROADMs. Sales of these products near-quadrupled to $19.7 million compared with the final quarter of Finisar’s fiscal 2009.