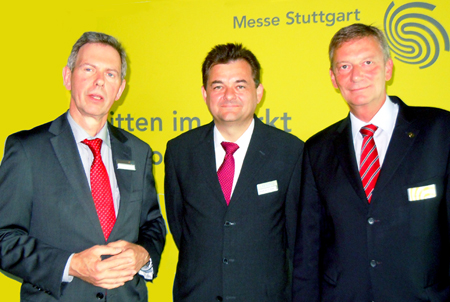 By Matthew Peach in Stuttgart
As LASYS 2012, the bi-annual expo dedicated to laser material processing, kicks off in Stuttgart, capital of proud Baden-Württemberg state, footballing metaphors were popular at the opening ceremony. The European Football (soccer) Championship commenced at the end of last week and, happily for the hosts, the German team had an early hard-fought win against Portugal. Today's (Wednesday) match against the Netherlands would be the centrepiece of the evening event for all attendees.

Presentations by a trio of key laser figures associated with the show and the city expressed the hope that exhibitors and visitors would reach their goals, hit their targets and inevitably know the score at the end. The almost-party mood was enhanced by the more important news from the German Engineering Federation (VDMA) that German laser exports in 2011 had “broken all previous records.”

Thomas Walter, director of the Stuttgart’s Tradefair’s Industry & Technology Division, told the opening press conference, “There is currently an extremely favourable economic climate for manufacturers of laser systems and optics. The laser is increasingly being used for traditional manufacturing processes and it continues to open up new fields of application.

“In the areas of production and material processing, the laser has assumed the tasks of cutting, welding, labelling, marking, drilling, machining, structuring, annealing, coating and refining, in both macro and micro processing.”

LASYS 2012 has attracted 178 exhibitors from across the world, with just over a quarter from outside of Germany. On show are demonstrations of lasers integrated into various manufacturing and measuring systems, robots and machine sub-systems, together occupying around 10,000 square metres of the new Stuttgart Messe.

Walter added, “LASYS primarily addresses visitors from the industrial sectors – mechanical engineering and automotive – but also from the optical and metal working industries, the electrical and electronics sector, medical technologies, precision engineering and plastics and semiconductor industries. We expect more than 4,500 visitors will attend.” 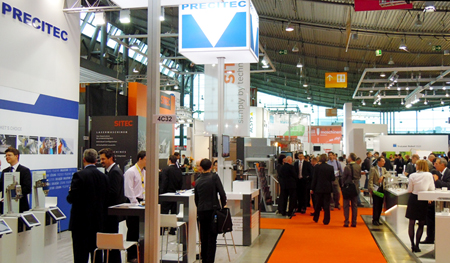 German laser industry growth
The second of the laser “wise men” to present was Gerhard Hein, managing director of the VDMA Working Group for Lasers & Materials Processing, who gave a report on the state of the German laser industry. In 2011 the German manufacturer members of the VDMA had manufactured production systems equipped with CO2 and solid-state lasers to the value of around €700 million, a 25 percent increase compared with 2010.

He added, “These companies benefited from the expansion of the world market for laser systems for material processing by also more than 20 per cent. Worldwide consolidation, i.e. the production result after taking account of the value-added attained by internationally-operating groups, and total sales of laser systems, including accessories and international sales by foreign subsidiaries, totalled €773 million and €1.04 billion, respectively.”

The volume of incoming orders, which had risen by more than 90 per cent in 2010 compared with production (up 56 per cent), increased again in 2011 by 14 per cent to €840 million. Hein said this provided “conclusive proof of the internationally stable condition of the propensity to invest – in spite of the continuing financial problems in the euro zone”.

Domestic (German) demand, which had lagged well behind foreign orders in 2010, grew by 31 per cent in 2011. Foreign orders, which were two and a half times higher than domestic orders, were estimated to have increased by 10 per cent.

During 2011, exports of laser systems increased by 21 per cent while their share in the value of production dropped slightly from 74 per cent in 2010 to 72 per cent. Compared with the export structure in 2010, there were again small shifts towards the USA, China and Eastern Europe to the detriment of Western European markets and other Asian countries.

CO2 and solid-state lasers
Exports of CO2 and solid-state lasers all hit new records with a volume of €226 million, up 21 per cent on 2010. Export quota measured against the production value was over 46 per cent. Demand shifts towards China and Eastern Europe were even more prominent here, said Hein. Western Europe lost a third of its share in 2010 to 28 per cent today, other Asian countries maintained a constant share of 18 per cent while the US held steady at 16 per cent of Germany’s total export volume.

Looking ahead, Hein commented, “Commercial prudence also necessitates a general adjustment to lateral movement up to slight growth in sales in the laser industry for 2012. The continually increasing absorption capacity in China, south-east Asia, India, Brazil, Turkey and South Africa can be regarded as a foregone conclusion, albeit flatter due to continuing monetary and fiscal policy problems in the euro zone.

He concluded, “The likelihood of maintaining this growth remains favorable in future through the positive innovation potential of the German laser industry, focused research promotion and a comprehensive and highly efficient scientific infrastructure. So we believe that LASYS 2012 will take place a calm, but stable investment climate, with favorable prospects in the medium term.” 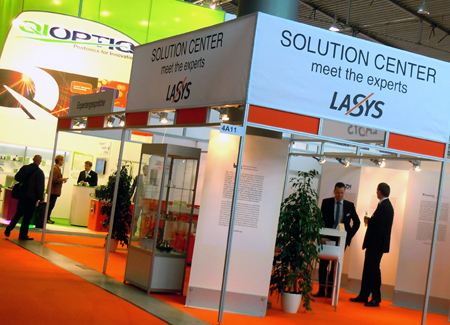 Favourable climate: LASYS 2012 has attracted 178 exhibitors, and hopes for 4500 visitors.

Future manufacturing
The third presenter was Prof. Thomas Graf from the Institut für Strahlwerkzeuge ("Laser Tools"), at the nearby University of Stuttgart.

Considering some of the show’s technology trends, Graf noted, “In the field of laser development, the increase in brightness of CW high-performance lasers and the scaling of the average power of ultra-short-pulse lasers are still important trends. These developments are now being increasingly complemented with growing interest in beam shaping and highly efficient lasers with other wavelengths.

“Such developments are helping to significantly widen the range of laser-processable materials. However, the advances in the efficiency of modern laser beams and their use in material processing are also leading to increased demands on system engineering, not least with beam guidance and safety which are also resulting in new developments in this field. We are presenting numerous breakthroughs on these topics during this year’s Stuttgart Laser Technology Forum [SLT].”

SLT presentation highlights
The following square bracket references indicate key presentations from the SLT, which although a different event runs coincidently with LASYS 2012

New power records recently achieved show how both the fundamental mode performance of disc lasers and efficiency in multi-mode operation can be substantially improved through pumping into the zero phonon absorption line of the laser crystal. In order to develop ultra-short-pulse lasers with high average output in the kilowatt range, the suitability of different laser crystals for mode-coupled operation in high-performance disc lasers is also being examined at present [Weichelt and Wentsch].

The challenges of fiber-optic beam guidance are discussed in articles where it is shown that fundamental mode radiation at the kW power level can not only be transported in new fibre structures [Voss], but also even in conventional multi-mode step-index fibres [Voss and Negel].

The improvement of beam quality in solid-state lasers is also a major challenge in terms of laser safety, which calls for the development of new and affordable solutions for laser-safe enclosures. As is known from the current limitations, such as during welding and cutting, the high brilliance of modern laser beams also leads, however, to thermically caused problems in the focusing optics. This is the reason why solutions to these problems are currently being formulated in extensive research projects [Stritt and Piehler].

However, the benefits of high beam qualities are being used to an increasing extent through specific shaping of the beam properties to optimize specific applications. Examples of this include shaping of polarisation distribution during cutting or beam guidance during drilling of highly precise holes with unprecedented precision and reproducibility or beam modulation to avoid spattering when welding copper [Abdou Ahmed, Onuseit, Feuer and Heider].

All these advances are based on an in-depth basic understanding of the underlying physical phenomena such as during hot crack formation [Stritt] or the production of instabilities when welding. This understanding is produced through the use of state-of-the-art diagnostics tools such as the X-ray facility at the IFSW [Stritt and Abt].

Current studies on laser processing of glass-fibre reinforced plastics demonstrate that new applications lead directly to new requirements regarding beam properties, process strategies and safety, and therefore also initiate new developments in the area of laser beam sources and system engineering. Once again the SLT will show how fast laser technology is progressing [Hafner and Weber] .

Matthew Peach is a contributing editor to Optics.org