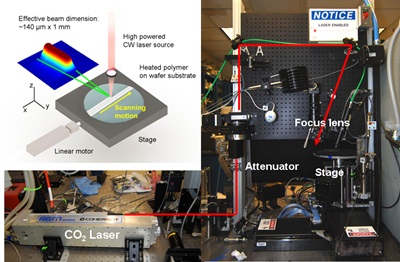 A new laser-based method to anneal thin photoresist films that are used to transfer intricate patterns onto silicon wafers is currently being trialled by semiconductor manufacturers, says a team behind the research.

Cornell University scientists sponsored by the Semiconductor Research Corporation (SRC) consortium say that their “laser spike annealing” approach has advantages over the standard hot-plate bake method that has been used by the industry for decades, and could be employed in conjunction with both existing 193 nm and future extreme ultraviolet (EUV) processes.

According to Michael Thompson and Christopher Ober from Cornell’s Materials Science and Engineering department, the speed of the laser method limits the degree of chemical diffusion that can take place during the annealing step.

That ought to mean better pattern fidelity and line-edge roughness for integrated circuits, and multiple potential benefits for chip makers:

“Faster, higher fidelity pattern transfer in the fab means better chip performance at reduced cost. This new laser method can deliver a breakthrough in thermal processing for the industry,” said Ober in an SRC statement. “Until now, lithography progress has been held back by the traditional methods for heating the resist that were regarded by many as already optimized. The laser proves otherwise.”

The Cornell team told optics.org that the laser process had now been experimentally demonstrated, producing features smaller than 30 nm with an EUV exposure tool.

Both CO2 and diode lasers have been modeled and tested. “Each laser type has its advantages,” noted Cornell. “The laser is primarily a source of directed heat and we use a variety of wavelengths depending on the types of substrates and materials. The far-IR wavelengths have less interaction with surface topography but require an absorbing substrate. Near-IR lasers have better coupling but increased interference from thin films on the surface.”

Resist chemistry
Chemical photoresists - typically comprising a mixture of polymers formulated for specific lithography processes - are applied to the surface of semiconductor wafers to form a thin layer of patternable material. Semiconductor makers then expose this layer to ultraviolet light before baking the wafer on a hot plate at a low temperature (80-150°C) for approximately one minute to activate the resist chemistry.

This creates a distinct chemical change between the exposed and unexposed parts of the resist, so that one or the other can be removed with a solvent, thus “developing” the familiar patterns that are seen on a semiconductor wafer.

Although chip makers have been using the standard baking approach pretty much since the dawn of the transistor age, one weakness is that prolonged heating, especially at higher temperatures, can cause excessive chemical diffusion in the photoresist. This can affect the quality and fidelity of the pattern that is imaged onto the wafer, with a potential knock-on impact to device performance.

The recent work at Cornell has shown that by instead heating the wafer with a laser for a few milliseconds, polymer integrity can be retained even at high temperatures (up to 800°C). The suggestion is that as manufacturers look to further scale their wafer production, the novel approach could be used to maximize resist sensitivity while minimizing pattern roughness. 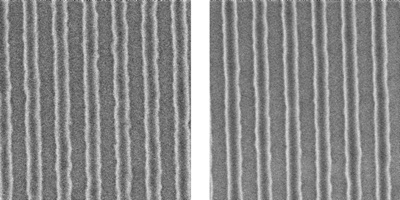 “We’re at the point where companies can begin to transfer the laser spike anneal to their internal R&D lines and optimize their resist formulation and/or lithography processes, enabling an alternate path for improving pattern resolution beyond the traditional baking technique that has remained essentially unchanged for the past 50 years.”

“As a next step, we anticipate creation of improved photoresists that can further leverage the benefits of this novel, more efficient annealing method,” he added.

Exactly which companies are exploring the laser annealing method currently is being kept secret, with Cornell and SRC merely saying that there is “significant” interest from multiple companies. The research team says that if those companies were to use the technique in volume processing, they would not require too many lasers, but that they would need to be close to state-of-the-art in terms of their power output and stability. “This type of system would be required for patterning multiple levels of the ICs, each linked with a photolithography stepper or scanner tool,” they commented.

Shallow junctions
One equipment company that already sells a laser spike annealing system, though for a different processing step, is California-based Ultratech. The firm’s LSA100 and flagship LSA101 tools can be used to make ultra-shallow junctions and highly activated source/drain contacts in both logic chips and LEDs, states the company on its web site.

Earlier this summer, Ultratech said that it had shipped its 50th laser spike annealing tool, which was set to be used by a foundry company in Asia as part of its move to 28 nm node device production. The system is said to support a throughput of 60 wafers per hour – sufficient for volume production processes.

With chip makers already trialling the new Cornell-developed spike annealing method, there is the potential for CO2 and diode lasers to find even greater application in the semiconductor fab, and help to ensure the continuation of Moore’s law as the industry adopts EUV tools and 450 mm wafer production in the coming years.