Stealthy start-up says that light generation inside solar cells is the key to high efficiencies, as it plans to build a pilot manufacturing facility. 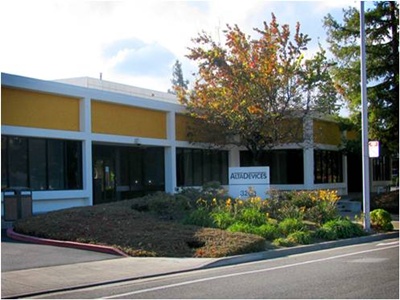 In spite of a recent plunge in the price of silicon wafers, cells and modules, there is a widespread belief that intense competition, Chinese manufacturing expertise and economies of scale will not be enough to make PV genuinely cost-competitive with conventional energy sources.

The benchmark, says the US Department of Energy (DOE), is reaching an installed PV cost lower than $1 per watt. At that level, which the DOE is hopeful of reaching by 2020 through investment in novel, rather than conventional, PV technologies, solar gets seriously disruptive.

With analysts at IHS iSuppli and Bloomberg’s New Energy Finance now quoting crystalline silicon module prices as low as $1.30 per watt, the DOE’s target might seem within reach. But even at iSuppli’s aggressive mid-2014 module price forecast of around $0.80 per watt, the installed cost would not come down to the required level. And as Lux Research has pointed out in recent months, there may not be that much room to drop costs further: silicon module prices are tied intrinsically to the cost of the raw material – and as demand continues to grow, this price will stabilize because feedstock production takes many years to scale up.

There’s no shortage of aspirational thin-film solar and concentrated PV exponents who think that they have the key to achieving the DOE’s goal. One of them is Alta Devices, a handsomely-funded start-up originating from Harry Atwater’s Caltech research group. Until this week, it had remained firmly in stealth mode, with little known aside from the company’s use of III-V semiconductor material to convert unconcentrated sunlight into electricity.

That stealthiness is changing, it seems, as Alta co-founders Atwater and photonic crystal pioneer Eli Yablonovitch – now the director of the Center for Energy-Efficient Electronics at Berkeley – go public with some aspects of the technology for the first time at the IEEE’s 37th PV Specialists Conference conference in Seattle. 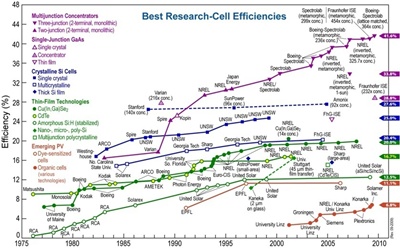 Efficiency record
The key development that they will report is that Alta has been able to break the long-standing efficiency record for a single-junction solar cell under one-sun illumination by close to 2%. At the conference, they and Alta’s Brendan Kayes will present a new record of 28.2%, verified by the National Renewable Energy Laboratory and advancing on the previous best of 26.4%.

There is a catch, of course. And that comes down to Alta’s use of GaAs material, often derided as “the semiconductor material of the future – and always will be”. The reality is a little different, however. This III-V material may not have reached the volumes or maturity of the silicon industry, but GaAs processes are responsible for producing RF devices that feature in virtually every mobile handset today, as well as the lasers now used widely in smart phone navigation devices and optical computer mice. With around 1.5 billion handsets now made every year, GaAs has done a lot of growing up.

Fluorescence: critical
Alta told optics.org that using GaAs is key, because the semiconductor fluoresces under illumination, producing photons through radiative recombination. This behavior hasn’t traditionally been something that solar cell developers have worried about, as Yablonovitch admits: “Up until now it was understood that to increase the current from our best solar materials, we had to find ways to get the material to absorb more light,” he says.

What the Alta team has discovered is that generating photons inside the cell is critical for maximizing the open-circuit voltage of the device. Efficient light emission, both internal to the cell, and to the external world, is an indication of high carrier density, large quasi-fermi level splitting, and therefore the high open-circuit voltage, they told optics.org. “Counter-intuitively, efficient light emission is the key for these high efficiencies,” says Yablonovitch.

Although the team is yet to publish any detailed work on how exactly the mechanism works, Yablonovitch is presenting his analysis at the IEEE event in Seattle, and will try to explain why the practical efficiency of single-junction GaAs cells has lagged the theoretical limit of 33.4% by so much.

What we do know is that the Alta team achieved the result with a thin film of GaAs, which they grew epitaxially before lifting the active device layers off of the host material with a wet chemical process. In a production environment, that is important, because it means that the relatively expensive GaAs substrates – needed for the growth stage but not for the cell’s operation – can be recycled and reprocessed.

Aiming for volume production
And for the first time there’s now a clear message coming from Alta that its longer-term plans will involve such volume cell production. Having raised $80 million in its series C round earlier this year, its total financing now stands at a reported $120 million.

Joe Foster, the firm’s VP of business development, told optics.org: “Over the next few quarters we will build out a pilot manufacturing facility, which will begin to demonstrate our production approach and the underlying economics.”

“Our goal is to produce in volume, profitably,” Foster added. “While we have demonstrated our leadership position with regard to efficiency with these recent announcements, in the near future we will also demonstrate that we can lead on cost as well.”

Co-founder Atwater, who is now the director of the Resnick Institute for Science, Energy and Sustainability at CalTech, will deliver a plenary talk at the Seattle conference on what he thinks it will take to deliver PV at widespread grid parity – a level of just $0.06-0.07 per kilowatt-hour.

He believes that reaching a cell cost of around $0.60 per watt (peak), accompanied by a sharp reduction in balance-of-system costs, is only possible with a handful of device types, of which the single-junction GaAs cell is one - especially if even higher efficiencies can be achieved with advanced, light-trapping designs. “Simple design coupled with a favorable temperature coefficient for PV conversion efficiency indicates that III-V semiconductor thin-film PV currently has unrivaled potential for annual energy production,” Atwater wrote in his plenary abstract.

He also sees potential in advanced, flexible silicon cells based on semiconductor microwires, deposited by chemical vapor deposition and then peeled off of the single-crystal substrate on which they are first grown. Such an approach would require only a tiny fraction of the silicon volume used in today’s solar modules, but the resulting cells should have a similar optical absorption and internal quantum efficiency – again because of the light-trapping effect.

At the moment, all of that potential remains in the laboratory, in the form of individual “champion” cells. As ever, the tough part will be to show that it is possible to manufacture such designs reliably and on a volume scale, and then do it profitably.

That is the challenge that Alta faces – but with more than $100 million raised so far, from investors including August Capital and Kleiner Perkins Caufield & Byers, some of the best minds in both optoelectronics and entrepreneurship clearly believe that it can be done.