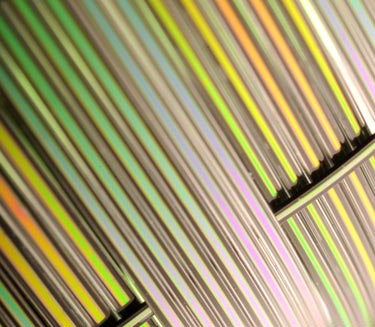 Yoel Fink and his collaborators at MIT, US, have announced a new milestone on the path to functional fibres: fibres that can detect and produce sound. Applications could include clothes that are themselves sensitive microphones, for capturing speech or monitoring bodily functions, and tiny filaments that could measure blood flow in capillaries or pressure in the brain (Nature Materials doi:10.1038/nmat2792).

Ordinary optical fibres are made from a preform, a large cylinder of a single material that is heated up, drawn out and then cooled. By contrast, the fibres developed in Fink's lab derive their functionality from an elaborate geometrical arrangement of several different materials, which must survive the heating and drawing process intact.

The heart of the new acoustic fibres is a plastic commonly used in microphones. By playing with the plastic's fluorine content, the researchers were able to ensure that its molecules remained asymmetric – with fluorine atoms lined up on one side and hydrogen atoms on the other – even during heating and drawing. The asymmetry of the molecules is what makes the plastic piezoelectric, such that it changes shape when an electric field is applied.

In a conventional piezoelectric microphone, the electric field is generated by metal electrodes. But in a fibre microphone, the drawing process would cause metal electrodes to lose their shape. So the researchers instead used a conducting plastic that contains graphite. When heated, the conducting plastic maintains a higher viscosity than a metal would.

Not only did this prevent the mixing of materials, but, crucially, it also made for fibres with a regular thickness. After the fibre had been drawn, the researchers aligned all of the piezoelectric molecules in the same direction using a powerful electric field. Despite the delicate balance required by the manufacturing process, the researchers were able to build functioning fibres under laboratory conditions.

"You can actually hear these fibres," said Noémie Chocat, a graduate student in the materials science department. "If you connected them to a power supply and applied a sinusoidal current then they would vibrate. And if you make them vibrate at audible frequencies and put it close to your ear, you could actually hear different notes or sounds coming out of them."

In their Nature Materials paper, the researchers measure and detail the fibre's acoustic properties rigorously. Because water conducts sound better than air, they placed it in a water tank opposite a standard acoustic transducer, a device that could alternately emit sound waves detected by the fibre and detect sound waves emitted by the fibre.

Ultimately, the researchers hope to combine the properties of their experimental fibres in a single fibre. Strong vibrations, for instance, could vary the optical properties of a reflecting fibre, enabling fabrics to communicate optically.