Terahertz detects from a distance

Rensselaer unveils an all-optical terahertz system that can identify target materials up to 20 m away. 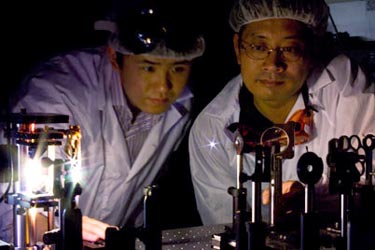 A team of researchers at Rensselaer Polytechnic Institute, US, is hailing new work into terahertz (THz) technology as a "major breakthrough in remote sensing". The Rensselaer group says that its new all-optical terahertz system can detect hidden explosives, chemical and biological agents and illegal drugs from a distance of 20 m (Nature Photonics DOI: 10.1038/NPHOTON.2010.165).

"The potential of THz wave remote sensing has been recognized for years, but practical application has been blocked by the fact that ambient moisture interferes with wave transmission," explained Xi-Cheng Zhang, the director of the Center for THz Research at Rensselaer. "I think I can predict that, within a few years, THz science and technology will become more available and ready for industrial and defence-related use."

Terahertz waves occupy a large segment of the electromagnetic spectrum between the infrared and microwave bands and can provide imaging and sensing technologies not available through conventional approaches such as X-rays. One of the major advantages of imaging using THz waves is the ability to see through clothing and packaging materials and identify any hidden materials by their unique THz fingerprints.

The team's all-optical technique for remote THz sensing uses laser-induced fluorescence. Two laser beams are focused to the same point, creating a plasma that interacts with a generated THz wave. The plasma fluorescence carries information about the target material to a detector where it is compared with a THz library, making it possible to immediately identify the target material.

"We have shown that you can focus an 800 nm laser beam and a 400 nm laser beam together into the air to remotely create a plasma interacting with the THz wave, and use the plasma fluorescence to convey the information of the THz wave back to the local detector," commented Zhang.

Though most of the research has been conducted in a laboratory setting, the technology is portable and eventually could be used to examine luggage abandoned in airports for explosives, other dangerous materials or for illegal drugs. On battlefields, it could detect where explosives are hidden.

"We have introduced a technique for stand-off terahertz wave detection using the intrinsic physical properties of THz radiation enhanced emission of fluorescence (REEF) from two-colour laser-induced gas plasma," conclude the authors in their paper. "The time-dependent THz-REEF can be modified by changing the relative phase of the two-colour fields and their polarizations, providing a unique approach to detecting the amplitude and phase of terahertz waves. With its omnidirectional emission pattern and minimal ambient water vapour absorption, this technique, together with the previously demonstrated long-distance terahertz wave generation, makes broadband standoff terahertz spectroscopy feasible."