A new angle on biosensing 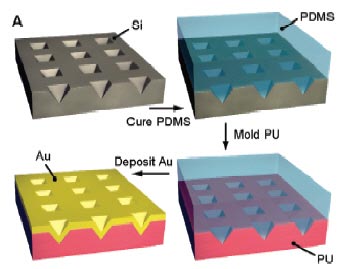 The sensitivity of biosensors based on plasmonic crystals (2D periodically nanostructured metal substrates) could be improved by tuning a little-explored parameter: the angle of light that excites surface plasmons in the crystals. So say researchers at Northwestern University in Illinois who have fabricated grating-based sensors from plasmonic crystals that are now more sensitive to detecting proteins. Such devices could be used in biomedical applications like drug screening and in environmental monitoring.

Only certain wavelengths of light can be reflected from or transmitted through plasmonic crystals thanks to the periodicity of the lattice in these materials. Plasmonics is a new branch of photonics that exploits surface plasmon polaritons, which arise from the interaction of light with the electrons that oscillate at a metal's surface.

Biosensing based on surface plasmon resonances is a label-free way to detect chemical and biological molecules in real-time thanks to advanced spectroscopic techniques. Most work done until now has focused on reducing nanofabrication costs and increasing detection sensitivities to improve the performance of biosensors. "Our paper makes progress on both these fronts," says team leader Teri Odom.

The Northwestern researchers have developed a new low-cost and large-area nanofabrication method based on soft interference lithography (SIL) to produce 2D plasmonic crystals that can trap light at their surfaces. The materials can be used to create disposable biosensing substrates in which measurements of protein binding can now be optimized by tuning the angle of light that excites the surface plasmons.

The fabrication technique can produce plasmonic crystals over areas as large as square centimetres. The researchers begin by first making a silicon master template of a 2D square array of nanopyramidal pits using SIL, followed by PEEL (a post-lithographic technique that transfers photoresist patterns onto functional materials). Next, they make hundreds of replicas of this template in a cheap material, such as polyurethane, by moulding. Gold is then deposited over the patterned substrates and functionalized with ligands. 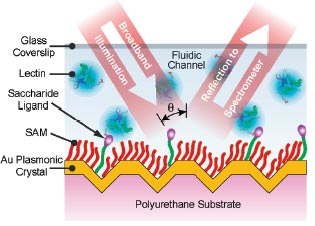 Shining light at a specific incident angle on the grating results in a narrow resonance dip in the reflection spectrum of the material. As proteins bind to specific receptors on the substrate, the plasmon resonance shifts to longer wavelengths, explains Odom.

"For the same plasmonic crystal sensing substrate, we observed large resonance shifts (that is, higher signals) by changing the angle – even though the sensing conditions were identical," Odom says. "We also showed that the signal-to-noise ratio in sensitive protein-binding measurements could be improved using angle-dependent resonances."

Optimizing the wavelength shift and resonance width is done by just tuning the excitation angle – no other modifications to the plasmonic substrates are needed, adds Odom.

The team will now look at using angle-dependent sensitivities to develop improved imaging-based multiplexed biosensors. For example, simultaneously detecting interactions between one target analyte with many molecules could be ideal for various biomedical applications, such drug screening.

"Results from our work show that by simply tuning the excitation angle, plasmonic crystals could be much better than conventional prism-based biosensors for high-throughput sensing," says Odom.