New information from frontiers of space and related data-gathering technology are the focus of SPIE Astronomical Telescopes and Instrumentation.

The newest astronomical instruments, systems, and technologies are yielding information not previously available: data from objects formed during the birth of the universe, the first images of exoplanets since their existence was predicted 15 years ago, and surveys of the changeable sky that detect asteroids and other moving objects. 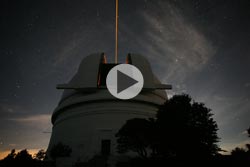 Researchers and developers at the forefront of these new technologies will meet at the SPIE Astronomical Telescopes and Instrumentation symposium later this month at the Town and Country Resort and Convention Center, San Diego, California, from 27 June to 2 July. SPIE expects more than 2000 participants to attend.

The event attracts astronomy experts from around the world, including two winners of this year's Kavli Prize. Jerry Nelson, founding director of the Center for Adaptive Optics at the University of California, Santa Cruz, and a scientist at the Keck Observatory, will give the all-conference banquet keynote talk. Roger Angel, founder and director of the University of Arizona Steward Observatory Mirror Lab, will present on the wide-field coronagraph space telescope designed for general astrophysics and exoplanet observations.

Event highlights include 11 plenary talks, several topical panel discussions, more than 60 companies in a three-day exhibition, poster and welcome receptions, and a student lunch with experts.