Using lasers to cool solids may seem counterintuitive but significant recent developments in optical refrigeration have seen the field gather momentum. Jacqueline Hewett speaks to Mansoor Sheik-Bahae, who leads the research effort at the University of New Mexico, US.

Major experimental progress has recently been made in the field of optical refrigeration of solids bringing the goal of an all-solid-state cryocooler without any moving parts one step closer. Mansoor Sheik-Bahae and his group at the University of New Mexico, US, are pioneering the art of optical refrigeration and have been able to cool a semiconductor load to a temperature of just 165 K starting from room temperature. As the group hones in on cryogenic temperatures, Jacqueline Hewett (JH) asks Mansoor Sheik-Bahae (MSB) how you use a laser to cool solid materials to such record low temperatures.

JH: How do you use lasers to cool solids? 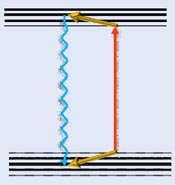 MSB: Optical cooling of solids, which is also known as optical refrigeration, is based on anti-Stokes fluorescence. Consider a two-multiplet system, such as the ground- and the first excited-state manifolds of a rare-earth ion, in a solid host. The sub-levels within each manifold are coupled by lattice vibrations of the host atoms, or phonons.

The cooling cycle is as follows: a coherent, low entropy light source (i.e. a laser) tuned to the red tail of the absorption spectrum will only excite electrons from the top of the ground state to the bottom of the excited state (as shown in figure 1). The electrons at the bottom of the excited state manifold will have to gain energy towards establishing a quasi-thermal equilibrium. This extra energy is drawn from the phonons, thus cooling the lattice host in the process. A similar process simultaneously occurs during the equilibration of the ground state.

In the final stage of the cooling cycle, the heat is carried away by fluorescence when the ions decay back to the ground state by emitting photons having a mean (fluorescence) energy higher than the absorbed laser photons. This phenomenon is called anti-Stokes fluorescence, and was predicted by Peter Pringsheim in 1929.

One essential requirement for a material to exhibit net cooling in this process is that it must have a high external quantum efficiency. This simply means a high probability that an excited ion will decay by emitting a photon that escapes the system. In other words, the non-radiative (phonon emitting) decay rate must be few orders of magnitude lower than the radiative rate.

JH: What materials are suitable for laser cooling in this way?

MSB: Rare-earth ions (such Yb, Tm and Er) are known to satisfy this condition due to their particular atomic orbitals. However, what prevented scientists from observing net cooling for more than six decades after Pringsheim's prediction was the presence of parasitic impurities.

Finally, in 1995, a group led by Richard Epstein from Los Alamos National Lab, US, cooled a highly pure Yb-doped fluorozirconate glass called ZBLAN. One may wonder why this particular glass was pure enough to cool. The answer becomes clear if we recall the telecommuncations boom in the 1990s when developing high-purity glasses for long-haul fibre communication was in full thrust: ZBLAN was in that category.

Apart from rare-earth doped glasses and crystals, any other material that may potentially satisfy the purity as well as quantum efficiency conditions should be considered a candidate for laser cooling. A prime example is direct-gap semiconductors such as GaAs, as theories predict lower temperatures as well as higher cooling power densities than obtained in rare-earth systems.

Laser cooling in semiconductors has been studied intensively by various groups in US and Europe. To date, however, no direct (net-) cooling has been observed in semiconductors as the aforementioned conditions, particularly the sample purity, are yet to be fully satisfied.

JH: What technical challenges are involved when cooling solids? 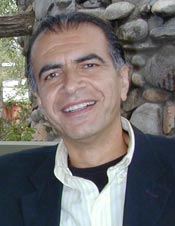 MSB: The most demanding technical challenge remains in the area of materials. We recently reported a new temperature record and achieved the first cryogenic operation by cooling a Yb-doped yttrium lithium fluoride (YLF) crystal to 155 K from room temperature.

Our collaborators from the University of Pisa in Italy played a key role by growing a rather highly doped (5%) crystal while keeping the parasitic losses very low. While it should be possible to achieve cooling down to 120 K in this crystal, cooling to lower temperatures requires crystals with a higher ratio of resonant absorption (Yb concentration) to the parasitic absorption.

Therefore, the main challenge is to grow extremely pure crystals with higher doping concentrations without degrading the quantum efficiency which is caused by the lifetime quenching phenomena. Similarly, for semiconductors, growing high-purity heterostructures while mitigating the surface recombination velocity to extremely low levels is the paramount challenge.

JH: What is the lowest temperature that you can potentially cool a solid to?

MSB: Fundamentally, there appears to be no hard limit on the lowest temperature that can be achieved in optical refrigeration if the parasitic absorption were to be eliminated. However, like thermoelectric devices, it is ultimately the cooling efficiency and consequently the overall heat lift that would determine the practicality of such devices.

Following simple thermal statistics of phonons and electrons, cooling efficiency as well as the resonant absorption are known to drop with temperature. The analysis shows that rare-earth doped systems should remain practical for temperatures down to 70 K or perhaps slightly lower.

We and others have chased cooling semiconductors for many years simply because they can potentially be used to cool to as low as 10 K with much higher cooling power densities than in rare-earth doped materials.

JH: How successful have you been to date at cooling semiconductor materials? 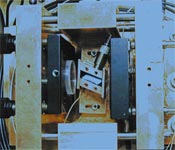 MSB: Our most recent work involved exploiting our Yb:YLF cooler to cool a semiconductor load (this should not be mistaken with direct cooling of a semiconductor). This is a significant and highly relevant demonstration because one of the most commonly sought applications of optical refrigeration is cooling infrared sensors that are typically made from semiconductors.

A GaAs/GaInP double heterostructure (2 µm thick) was bonded directly to our Yb:YLF crystal (the cooling element) and subsequently cooled to 165 K in a cavity enhanced arrangement. We chose GaAs because it is mostly transparent to the fluorescence waste from the active Yb ions and therefore did not require fluorescence shielding.

Another significance of this result is its potential use for an all-optical rare-earth/semiconductor tandem cooler once cooling-grade semiconductors become available. Such a device will use a rare-earth cooler (such as Yb) to lower the temperature of a GaAs device to about 100 K in the first stage. A second pump laser will then cool the GaAs device in the second stage to much lower temperatures. This exploits the fact that semiconductors exhibit higher quantum efficiency at lower temperatures, and are therefore more favourable to cool.

JH: What applications look set to benefit from laser cooling?

MSB: The immediate application of optical refrigeration technology is an all-solid-state cryocooler without any moving parts. This becomes particularly attractive for certain IR imaging applications (e.g. space-based imagers) where microphonic noise due to mechanical vibrations of the cooler lead to image degradation. Also, in fibre-coupled geometries, the cooling element itself can be very lightweight, thus lending itself to high agility and gimbaled applications.

Optical refrigeration has the unique capability to be scaled down to wavelength-size dimensions, thus realizing compact or spatially selective micro-coolers. Future advances are also expected to render this technology suitable for cooling superconducting electronics and sensors. It has also been suggested that using photovoltaic converters, the fluorescence waste can be recycled to enhance the efficiency towards Carnot limit.