Early efforts to create an intelligent power grid have not been trouble-free in the US. 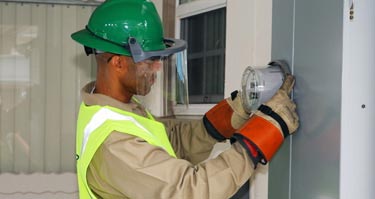 As part of the US economic stimulus package, the Obama administration has pledged $3.4bn toward "smart grid" technology. Smart grids and meters in theory will be able stabilize the power grid in the event of a failure, better incorporate alternative energies and vastly improve overall grid efficiency. As of January 2010, 13.6 million smart meters had been installed across the US.

Unfortunately, the first few rounds of new installations have not always gone as smoothly as hoped.

Customers in California and Texas have complained about higher bills and inefficient systems. Pacific Gas & Electric customers complained to the California Public Utilities Commission that the utility had told customers that smart meters would help them save money on their electric bills, and filed a lawsuit against PG&E.

Another big issue is security. In April 2009 reports surfaced of hackers based in Russia and China electronically breaking into US sewage and electrical systems. A study spanning 14 countries conducted earlier this year by the McAfee security firm found that half of all power plant and utility owners reported their systems had been breached by hackers. Some citizens are also worried about protecting their own privacy and security, concerned that electric companies may profile customers who use high amounts of energy outside of normal hours.

Utility companies are confident that their meters are secure. Southern California Edison (SCE) "has conducted extensive security planning and testing, and has developed security solutions, many of which were adapted from the banking and defense sectors," says Charles Cameron, SCE corporate communications. "All information transmitted between customer meters and the company is encrypted using US Government-approved and recommended standards. Similar security standards have been implemented for information transmitted between the meter and customer-owned, smart communicating appliances."

One of the biggest reasons for smart meters, from the consumer perspective, is keeping better track of energy use. However, in many cases utilities are installing meters without providing customers with access to that information.

According to Cleantech Market Intelligence, less than half of all smart meters shipped globally by 2013 will include home area network (HAN) capabilities, although the North American HAN-enabled meter penetration rate will be higher, at 81%. HAN technology is what provides access to individual home owners. Even SCE customers, which have HAN-enabled smart meters, won't be able to access them until later this year. In other situations, the grid can't even talk to itself; less than 20% of the 48,000 energy distribution substations have any automation, according to John D McDonald, general manager of marketing for GE Energy.

Google recently released a free product called PowerMeter that allows users to track their power usage in near real time. Other independent companies offer systems for consumers that are accessible on smart grid devices, the web, iPhone-enabled displays and energy controls.

A product created by Zensi, purchased by Belkin earlier this year, goes one step further by specifically measuring the electrical output of each appliance in the house using each machine's high-frequency electrical noise produced when different devices are turned on, and does not require HAN capabilities.

"It gives people information down to individual appliances and categories rather than a single aggregate number, thus providing more actionable information to the consumer," says Shwetak Patel, co-founder of Zensi and a professor at the University of Washington, Seattle.

Despite the issues that have arisen, there are some benefits that have come out of this transition to smart meters. One is new jobs. Start-up companies are creating security programs specifically for the smart meters. Companies like Google and Zensi are producing electricity-tracking software and devices. Semiconductor companies are competing with smart-grid chip manufacturer Zigbee for a place in the smart systems market, with more penetration outside the US. Other companies are being contracted by larger utilities like PG&E and SCE to install the meters themselves.

A new study from the National Renewable Energy Laboratory in Golden, CO, proposes that 35% of electricity could come from alternate energies without installing new interstate transmission lines, but rather will require smart planning and co-operation between utilities.

• This article is excerpted from a longer story published by SPIE Newsroom.