Ferenc Krausz and his partners in Austria built a laser company around ultrashort light flashes and chirped mirror technology. 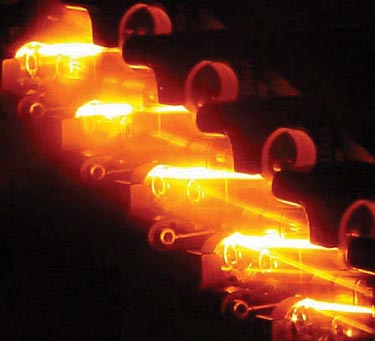 In the early 1990s the field of ultrashort laser physics was gripped by a pioneering spirit. Ferenc Krausz, his PhD recently completed at Vienna University of Technology (TU Vienna), was enthusiastic about the new possibilities promised by solid-state laser technology.

The first working group Krausz led at TU Vienna in 1994 was dedicated to the study of new types of solid-state and short-pulse lasers. This team was driven by a desire to significantly shorten the duration of light pulses, using Ti:sapphire lasers. The 100 fs pulse barrier had already been cracked. But the broadband laser material titanium-doped sapphire offered an opportunity to get much lower than that.

The greatest challenge was how to counteract the dispersion that became more and more noticeable as pulse duration shortened. Dispersion occurs in all materials. It delays the colour components in broadband light to varying degrees and thus leads to a lengthening of the pulse. The shorter the pulse, the wider its bandwidth, an effect which causes the pulse to disperse even faster.

Krausz' working group solved the problem by inventing "chirped mirrors" and using them to control the dispersion of femtosecond Ti:sapphire oscillators, in co-operation with Robert Szipöcs and Kárpát Ferencz of Budapest.

Chirped mirrors (CM) are made from alternating nanometre-scale layers of two different transparent optical materials with different indices of refraction. They can reflect up to 99.9% of the incident light over a wide bandwidth. In addition, they let light of different wavelengths penetrate to differing depths before it is reflected.

Spurred on by this success, Krausz, together with Andreas Stingl and Christian Spielmann, both scientists in his team at TU Vienna in 1994, decided to set up a company, FEMTOLASERS Produktion, in Vienna.

In 1997 the first commercial laser with a pulse duration of less than 12 fs was ready for market. Demand for these laser systems was rising steadily and FEMTOLASERS was the only company serving the market.

Although in the beginning it was not yet clear just what the unusually short pulses could be used for, it quickly became apparent that they could open up spectacular new perspectives in biology and physics in particular.

Ever shorter pulses permitted the observation of ever faster processes, for example, in nature. Here, time-resolved femtosecond spectroscopy has done much to further the understanding of elementary processes that occur in chemical reactions. With the aid of this technique, it is possible to track – in realtime – the ultrafast movement of atoms in chemical reactions.

The laser pulses are used, for example, to capture momentary snapshots of molecular arrangements. These individual snapshots can then be put together, like an animated film, to depict the time sequence of an event. In 1999 Ahmed Zewail was awarded the Nobel Prize in Chemistry for this development.

Further development in femtosecond pulse technology since 2001 has opened the door to the attosecond time dimension, 1000 times shorter than femtoseconds. At that time, the team at TU Vienna was the first group worldwide to succeed in generating individual attosecond pulses with a length of 650 as.