The explosive growth in OLED lighting patents since 2000 coincides with increased government funding. 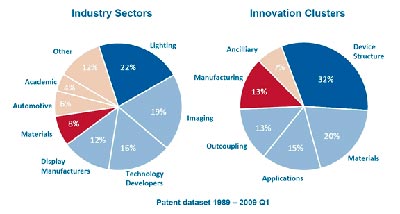 OLED lighting patents filings are growing rapidly with more than 90% of filings appearing since 2000, according to the latest OLED Lighting: A Review of the Patent Landscape report from cintelliq, a leading provider of information services and technology consulting to the organic semiconductor and organic electronics industries. This recent study identifies more than 1800 patents focused on white OLEDs for lighting applications.

An analysis of the patents filed shows six main innovation clusters: device structures, materials, applications, out-coupling, manufacturing and ancillary, with the first three accounting for 67% of the patents (see figure: Innovation Clusters). Several organizations, for example Kodak and Konica Minolta, are present in the top three of more than one cluster.

"This report is the first of its kind to clearly identify in detail the filing strategies of the leading OLED lighting developers. This report is an essential resource for developing a company's technology development and roadmap," said Craig Cruickshank, lead analyst at cintelliq. "Looking forward, the explosive growth in OLED lighting patents is set to continue over the next five years. Government funding, government legislation and commercialization will help drive OLED lighting into homes."

Cintelliq says that more than 1800 published (EP, JP, US and WO) and granted patents (EP and US) assigned to more than 200 commercial and academic organizations were included in the analysis to produce the OLED Lighting: A Review of the Patent Landscape report.

Last week optics.org reported that GE and Konica Minolta plan to show off their latest OLED lighting advances at Light + Building 2010 in Frankfurt, Germany, and LightFair 2010 in Las Vegas, Nevada, US. The prototypes will demonstrate the ultra-thin form factor and flexible nature of OLED lighting.

"OLED Lighting: A Review of the Patent Landscape is an invaluable guide to technology developers, patent departments, licensing departments and business developers who want to develop technology and patent strategies," claims cintelliq. "It will help readers to understand how the OLED lighting industry is developing with respect to patents. Readers of the report will be able to determine the technology space, identify the number of patents being filed, by who, and when. It will also outline the application space."

• cintelliq is also responsible for establishing the annual Organic Semiconductor Conference. The next conference is planned for September 2010.