Will consumers be replacing 40 watt incandescent bulbs with LED alternatives by the end of the year? 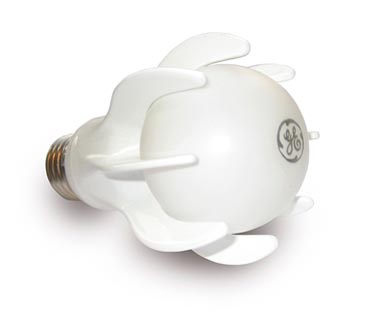 GE plans to release an LED-based product that is a direct replacement for 40 W incandescent and halogen bulbs by early 2011. The company says that its 9 W GE Energy Smart LED bulb will provide energy savings of 77% and last 25 times longer than conventional 40 W incandescents. It is expected to retail for between $40 and $50.

"Consumers have been reluctant to move away from less efficient incandescent bulbs because they love the light quality," says John Strainic, global product general manager, GE Lighting. "This new GE Energy Smart LED bulb will address that lighting preference head-on and give consumers yet another option to light their homes and businesses."

One reason for this confident prediction is that GE has designed the bulb to better direct light downward onto the intended surface, not just out of the top of a lampshade, as most current LED bulbs are prone to do. GE has filed multiple patent applications for the bulb and expects it will be an Energy Star-qualified LED omnidirectional lightbulb.

According to GE, another advantageous property is that the LED technology delivers the full brightness of an incandescent or halogen bulb instantly. The product has a quoted lifetime of 25,000 hours and the solid-state design means that there are no filaments to break and no mercury.

GE will put prototypes of its bulb, outfitted with Cree XLamp XP-G LEDs, on display at two upcoming trade shows: Light + Building 2010 in Frankfurt, Germany, and LightFair 2010 in Las Vegas, Nevada, US. And it's not just LEDs that GE will be exhibiting. The company will also showcase its latest OLED technology, including lighting fixture prototypes.

"We're still experimenting and imagining a future with OLEDs but we think that our approach will allow us to apply light to literally any surface at a thickness of just a few sheets of paper," says Zoltan Vamos, GE Lighting's Budapest-based global general manager of lighting technology.

Researchers and product development teams from GE Lighting in Cleveland, US, in partnership with Konica Minolta Holdings, Inc., Konica Minolta Technology Center, Inc. (collectively KM) and GE's Global Research Center in Niskayuna, New York, have been working together on OLED technology since 2007.

KM sees OLED lighting as one of its most promising new businesses. It began the construction of a new pilot line in November 2009 to establish a mass production capability. The line will be completed in the autumn of 2010. A roll-to-roll manufacturing infrastructure that enables high-performance and low-cost devices will allow a more widespread adoption of GE's OLEDs when commercialization of the product – various sized panels of light (based on 75 × 150 mm or 3 × 6 inch) – starts in 2011.