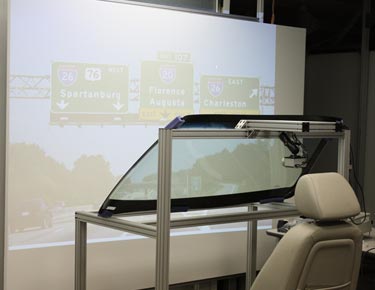 General Motors (GM) has revealed details of an intriguing new head-up display (HUD) system that it is developing with Carnegie Mellon University and the University of Southern California.

Unlike current HUDs, which only use a small portion of the windscreen, this new design would use data gathered from an array of vehicle sensors and cameras and project images generated by compact ultraviolet lasers directly onto the entire surface of the windscreen.

"The full windscreen head-up system will leverage night vision, navigation and camera-based sensor technologies to improve driver visibility and object detection ability," said Thomas Seder, group lab manager for GM R&D. "Let's say you're driving in fog; we could use the vehicle's infrared cameras to identify where the edge of the road is and the lasers could 'paint' the edge of the road onto the windscreen."

The concept involves coating the windscreen with a series of transparent phosphors that emit visible light when excited by ultraviolet. In essence, the windscreen becomes a large transparent display. According to GM, the ability to use such an expansive surface will enable the system to alert drivers of potential dangers that may exist outside of the normal field of vision such as children playing or motorcycles overtaking.

The plan is that the new HUD will also work in tandem with night-vision systems. "This design is superior to traditional head-down display-based night vision systems, which require a user to read information from a traditional display, create a mental model and imagine the threat's precise location in space," explained Seder. "The enhanced vision system could combine night vision with the head-up system to identify and highlight the precise location of animals roaming along the side of a road for example."

As an added safety feature, the HUD could be combined with automated sign-reading technology to alert the driver if they are driving over the posted speed limit. The HUD could also make use of navigation system data to tell the driver they are approaching their desired exit by reading overhead traffic signs.

"We have done testing on a number of drivers and their performance is better relative to head-down systems that are commonly used in vehicles today," Seder said. "It's a compelling design."

Head-up displays are currently available on the GMC Acadia, Chevrolet Corvette, Buick LaCrosse and Cadillac STS. While this next-generation full windscreen system has not yet been identified for a future GM vehicle programme, Seder says that some of the supporting technologies could end up in GM vehicles in the near-term future.