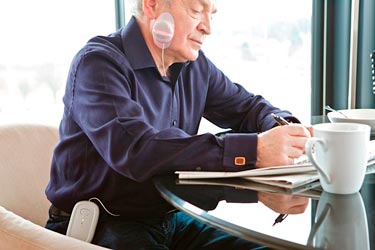 Scottish firm Ambicare has unveiled a light-emitting plaster that looks set to transform the treatment of non-melanoma skin cancer. The Ambilight PDT is both simple to operate and portable, meaning that patients can go about their daily routine while receiving photodynamic therapy (PDT).

"At the moment, patients have to attend a PDT clinic in a central hospital, which creates a bottleneck," Ian Muirhead, CEO of Ambicare, told optics.org. "We hope to migrate treatment to your local GP, making it significantly easier to access PDT for non-melanoma skin cancers such as basal cell carcinoma. Not only does this offer a cost saving, it also reduces waiting lists."

PDT uses a light-activated drug to kill cancerous cells. In the case of skin cancer, the drug comes in the form of a cream that is applied topically onto the lesion. All patients then need to wait around three hours before light can be fired at the area to treat the cancer.

Knowing that there had to be an easier way of doing things, clinicians at Ninewells Hosptial in Dundee started collaborating with researchers at St Andrews University and formed a company called Ambicare. The company raised its first round of funding in early 2008 and is now launching its first product.

"The key challenge is to have a highly uniform light source that is flexible, can be attached to the skin and operates off a battery," explained Muirhead. "The Ambilight PDT uses LEDs and diffusers in a novel packaging solution and essentially turns a point source into an area emitter."

The Ambilight emits at a peak wavelength of 640 nm with a full-width half maximum of 20 nm. The company quotes an irradiance of 7 mW/cm2 and a total light dose of 75 J/cm2.

"The whole device is disposable and is designed for one use only," said Muirhead. "The idea is that you would have the light-activated cream applied at your local surgery. You then put the Ambilight on straightaway and wear it for six hours – the first three hours with the light off and the next three with the light on."

According to Muirhead, one added benefit is that patients experience less pain when using Ambilight compared with conventional PDT.

"The only drawback is that we can only treat lesions with a maximum diameter of 24 mm at their widest point," he commented. "We have some physical limitations as to where the Ambilight can be attached to the body. For example if it's a very highly curved area, such as the bridge of your nose."

Having been granted a CE mark at the end of 2009 (which gives Ambicare the legal right to sell its product in Europe as a medical device), the company is hoping clinicians will see the attraction of the light-emitting technology.

"Patients are already being treated at Ninewells and some other key opinion leaders have taken early samples," said Muirhead. "The aim is to roll this out to dermatologists, particularly in UK, and migrate PDT away from central hospitals to a GP setting. We are finalizing the cost but envisage significant savings. By moving PDT out of the hospital you could save £600–800 per treatment."