The pulse quickens for ultrafast optics 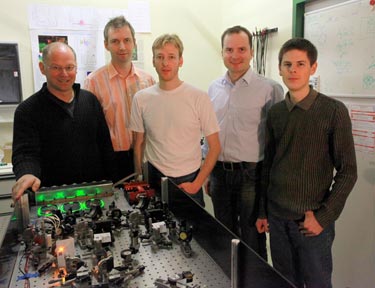 Single-cycle pulses in the telecoms wavelength regime have been demonstrated for the first time, with scientists touting possible applications in ultrafast optical imaging and frequency metrology.

A group at Konstanz University, Germany, has produced single cycles of light with a pulse duration of 4.3 fs, close to the shortest possible value for a data bit of information transmitted in the near-infrared (Nature Photonics DOI: 10.1038/NPHOTON.2009.258).

"We have generated what we believe to be the shortest and most high frequency truly single-cycle pulse to date," Alfred Leitenstorfer, chair of modern optics and quantum electronics at Konstanz, told optics.org.

"Our initial motivation for this research targeted applications in ultrafast spectroscopy, but it turns out that such lasers are also useful for precision metrology and bioimaging."

Single-cycle pulses with ultrahigh bandwidth are also interesting for frequency metrology applications and optical phase control. In this field, self-referenced optical-frequency combs can be used for ultraprecise measurements of light emitted by lasers, atoms, molecules or stars. 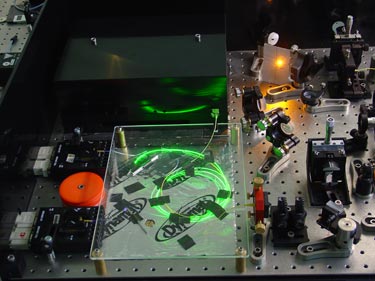 In principle, the extremely short pulse duration of the German laser system lends itself to data transmission at rates of over 100 Tbit/s over a single optical fibre. What is more, the team achieved this using a compact and robust fibre-laser system.

Generating short laser pulses is not an easy task, however. In this case, it required extremely careful synchronization and manipulation of two sets of pulses that had to be combined coherently. Any significant timing jitter between the two pulse streams ruins the process.

The solution adopted by Leitenstorfer and colleagues is to derive the two separate pulse trains from a single erbium-doped fibre-laser source. Using a single source dramatically reduces the timing jitter between the two pulse trains, yielding optimal constructive interference and an even shorter single pulse.

Fibre technology comes with many other benefits, including exceptional stability and ease of use. "These features allow us to actually generate short pulses in different wavelength regimes that are strictly phase-locked with each other and to recombine them coherently to generate a shorter pulse," explained Leitenstorfer. "While this principle also works for other technologies, it is implemented most simply with our erbium fibre-laser system."

The results demonstrate that fundamental limits for optical telecommunications are accessible with existing technology and standard free-space components. Currently, the Konstanz team is applying the laser to measure the extremely fast (a few femtoseconds duration) plasmon activity associated with single optical antennas. The next challenge is to amplify the pulses in an all-fibre set-up.

Commercialization of the research is already under way through a tie-up with German manufacturer Toptica Photonics.