For your viewing pleasure, Chinese scientists unveil a glimpse of the future – and it's in 3D

Researchers at China have designed what they believe to be the largest 3D colour display with a holographic functional screen. The 1.8 × 1.3 m2 screen provides continuous, natural 3D images, which the team hopes will not only make great viewing for consumers, but will also benefit applications in medical, industrial, military and advertising (Optics Letters 34 3803). 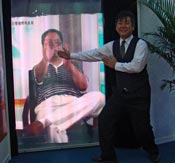 "We think that our 3D display method is not just a 3D display to provide viewers with the 3D effect," the authors told optics.org. "It's an integrally practical technology for 3D communication to transmit 3D scenes over large distances. We expect it will become a part of the new generation of the telecommunication service in the near future, allowing people to communicate in 3D."

Possible applications include creating realistic training environments for medical professionals and soldiers, as well as a new generation of digital billboards for outdoor advertising.

Holography is widely tipped as the ultimate 3D imaging method of the future. However, practical displays are difficult to build due to the limitations of today's recording materials. What is more, today's 3D displays suffer from lack of image-updating capability.

"Almost all of the available 3D display technologies have some technical deficiencies," explained the authors. "A major challenge is realizing large-size real-time 3D functionality while maintaining full colour and high resolution."

The Chinese team overcame these limitations by adopting a straightforward approach to image acquisition and display. A total of 64 digital cameras are placed along a single axis to capture a 3D object from different viewing angles. This 3D data is then displayed using the same number of projectors arranged in the same configuration as the camera array.

Each projector emits its data onto a holographic functional display screen at various angles. By mirroring the image capture setup, the projectors can recreate the original 3D object. Since the magnification depends only on the ratio between the geometry sizes of projector and camera arrays, the screen size is not limited by the usual restraints experienced by holographic technology.

"Our method encounters no difficulties in achieving any size of high quality 3D display," commented the authors. "The quality of the final display depends on the quality of each camera-projector pair, while the 3D space recovering fidelity depends on its quantity to make 3D scene sampling."

The ultimate goal for the team is to commercialize the system. In the meantime, the team will continue to optimize the display, developing a range of hardware and software solutions to match various applications.