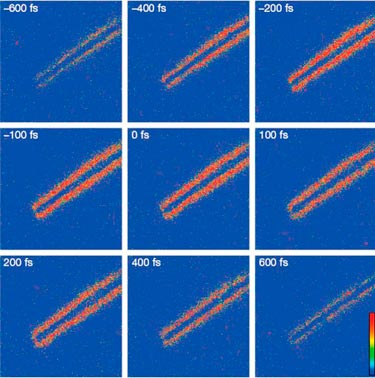 Researchers at Caltech in the US have invented a new type of imaging technique that merges the best qualities from electron and light microscopy. The hybrid technique, dubbed "photon-induced near-field electron microscopy" can image nano-objects with femtosecond time resolution. It could be used to directly visualize ultrafast events that occur on tiny length scales.

Nanotechnology is now firmly established as an important area of research and increasingly scientists need to be able to image nanostructures in more fine detail. The new imaging technique, devised by Ahmed Zewail's team, combines the nanoscale spatial resolution of electron microscopy with the femtosecond time resolution of ultrafast light pulses.

The researchers illuminate the nanostructure to be imaged (for example, a carbon nanotube or silver nanowire) by firing it with a femtosecond laser pulse to create an "evanescent wave". Unlike ordinary, free light, evanescent waves exist only near a surface and because of this they interact efficiently with surface electrons.

Zewail and colleagues exploit this fact by focusing a pulse of electrons onto the nanostructure being imaged while simultaneously firing light pulses at it. In this way the electrons gain energy from the light field which are then detected. The researchers create an image of the nanostructure by selecting only accelerated electrons and the number of collected electrons is proportional to the strength of the evanescent field.

The electrons used in the new microscopy technique travel at 70% of the speed of light. This is why they only spend a fraction of a femtosecond near the surface of a nano-sample. To increase electron-light interactions at such short time intervals, the researchers need to magnify the light fields. They do this by using two synchronized femtosecond light pulses.

By varying the time delay between the exciting light pulses and the imaging electron pulses, it is possible to obtain "snapshots" of the evanescent field as it evolves over a matter of femtoseconds. According to the scientists, using even shorter pulses should allow them to track the ultrafast processes that occur in photonic and plasmonic devices, for example.

The electrons probes are also relatively "clean", comments F Javier Garcia de Abajo at the Institute of Optics in Madrid, Spain – who was not involved in the research. "Moderate electron beam intensities cause only marginal perturbations in the sample, thus allowing faithful imaging."

Propagating light fields along nanostructure surfaces are important in nanophotonic devices that carry and process optical signals, he adds. The new technique could be further improved to study such propagations, thus opening up a new way to study the nanoworld.

The work was published in Nature.