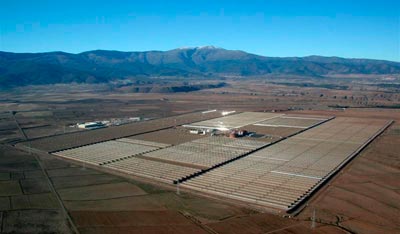 Physicists in the US say that they have taken an important step forward in the race to build solar cells that are both cheap and highly efficient. They have managed for the first time to tap some of the excess energy of high-frequency photons impinging on a thin film of silicon. The breakthrough could lead to a new kind of efficient cell within the next three years, claim the researchers.

Most of today's commercial solar cells are "first-generation" devices made from single crystals of silicon. These convert up to 18% of the incident solar power into electrical power, but this power is still far more expensive than that from fossil fuels because of the huge costs involved in purifying, crystallizing and sawing the single silicon wafers. Second-generation cells aim to close this cost gap by using thin films of silicon or compound semiconductors mounted on glass substrates but these cells suffer from structural defects that make them relatively inefficient.

Krzysztof Kempa and colleagues at Boston College in the US have now demonstrated a technique for creating solar cells that could take the technology into its third generation. They say they can generate more energy than is possible with conventional cells by exploiting the fact that solar radiation consists of a range of wavelengths. In their demonstration, electrons are removed from the conduction band before they have a chance to drop down and therefore "cool" significantly.

At its core, the idea is a simple one – by building a thinner cell, the electrons traversing it have less time to cool down. The researchers used the standard industry technique to deposit thin films of p-type silicon (which has an excess of holes), undoped silicon and n-type silicon (excess of electrons) onto a glass substrate. But whereas the p and n layers in standard amorphous silicon cells are usually about 20 nm thick, in this case they were just 5 nm thick. The undoped layer, rather than being 300 or 400 nm thick, was instead as thin as 5 nm.

The reason that researchers have dismissed the idea of ultra-thin solar cells in the past is that, being so thin, the devices can only trap a small fraction of the photons that strike and then pass through it. Indeed, Kempa and colleagues measured the efficiency of their device to be just 3%. According to the researchers, however, the important result is that their cell generates higher output voltages.

The team built cells with a range of thicknesses and then exposed each of them to both green light and blue light. As hoped, they found that the very thin cells generated a greater voltage at blue wavelengths than they did at green, which, they say, is proof that the cells were able to harvest at least some of the excess energy of the hot electrons. Additionally, they found that the thinnest cells also generate more current, due to their much greater electric fields (which are inversely proportional to thickness for a given voltage).

The challenge now, says Naughton, is to make a cell that is "optically thick as well as being electrically thin." They believe this could be done by making a cell from an array of wires, each of which is a few microns long and coated with a layer of amorphous silicon just a few nanometres thick. The idea is that the length of each wire determines how much light the cell collects while the thickness of the coating determines how quickly, and therefore with what voltage, electrons can escape.

Kempa, Naughton and their colleague Zhifeng Ren have set up a company called Solasta to commercialize their technology, hoping to ultimately build cheap cells that are between 20 and 30% efficient. In the meantime, says Michael Naughton, Solasta aims to produce "a highly competitive" solar cell by 2012.

Martin Green of the University of New South Wales in Australia agrees that solar cells taking advantage of hot electrons are an exciting prospect. Indeed, he thinks they could potentially be twice as efficient as conventional cells. However, he doubts that the results in the current work are really due to hot electrons of the type needed for such highly efficient devices, since, he says, there are many effects that would produce the observed dependence of voltage on incident light wavelength. "The results are nonetheless interesting and may stimulate more effort in this area," he adds.

The research is reported online in Applied Physics Letters.