What happens if you drill an array of tiny holes into a metal foil and then measure how much light the holes allow through? It turns out – as physicists discovered back in 1998 – that much more is transmitted than if the light behaved like water passing though a screen. The light is absorbed by electrons on the surface of the metal, creating "surface plasmons" – collective oscillations of conduction electrons – that travel via the holes to the dark side of the foil, where they re-emit the light. 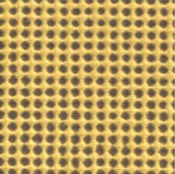 Now, physicists in Germany have discovered that this phenomenon, known as "extraordinary optical transmission", does not occur in foils that are thin enough to be semi-transparent to light. Instead, Bruno Gompf and colleagues at the University of Stuttgart found that punching holes in such films leads to a significant reduction in the amount of light that gets through. The findings could be useful for creating new kinds of polarization filters and other components for photonic circuits.

Gomp's team began by coating a glass plate with a gold film just 20 nm thick. This should let about half the light through, which was confirmed by measuring the transmission as a function of wavelength. The team then used a beam of argon ions to etch a square array of 200 nm diameter holes with a period of 300 nm. Although this involved removing a significant amount of gold, the amount of transmitted light actually fell by a factor of about five at some wavelengths.

To gain a better understanding of this surprising observation, the team repeated the measurement at various angles of incident light. The researchers found that the wavelength of the transmission minimum shifted at certain angles relative to the square array, which led them to analyse the effect in terms of plasmons propagating on a square lattice. And because the material is so thin, the team also had to assume that surface plasmons on either side of the film were coupled to each other – making them different from the surface plasmons on thicker films responsible for extraordinary optical transmission.

Putting all of this together, the team concludes that only certain damped short-range surface plasmons can be excited under these conditions, and that while such plasmons absorb light, they do not re-emit it. Furthermore, the team showed energy of such plasmons corresponds to the energy of light at the dip in the transmission spectrum. Gompf told physicsworld.com that the team is now investigating films with different thicknesses as well as arrays with different periodicities and holes that are randomly positioned.

Because the transmission of such films depends so much on the wavelength and orientation of the incident light, he believes that such materials could be used to create tiny polarization filters and other components for photonic circuits.

The work is reported in Physical Review Letters.