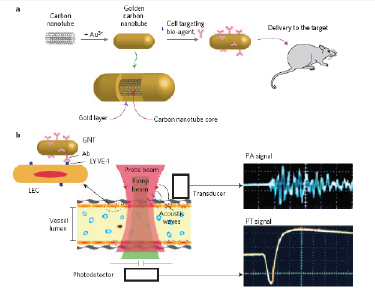 Researchers in Arkansas in the US have developed new nanomaterials – dubbed golden nanotubes – for use as super contrast agents for highly sensitive imaging of tumours and cancer cells. When intravenously injected with the nanotubes, mice with tumours in their lymph nodes show photoacoustic and photothermal signals that are 100 times stronger than those observed for ordinary carbon nanotubes. The nanomaterial, which can also be used to carry therapeutic agents thanks to its hollow core, could be used as a more efficient and less toxic alternative to other nanoparticles and fluorescent labels for non-invasive tumour imaging.

Most conventional optical-imaging techniques are not suitable for imaging through thick living tissue because light is strongly scattered by biological matter. This leads to poor spatial resolution and features such as tumours are difficult to make out.

Photoacoustic and photothermal imaging overcomes this problem by measuring the ultrasound and heat produced by photons that are fired into a sample. The technique works because the sample heats up when it absorbs photons, causing it to expand. Pressure waves propagate out from the expanding structures and these can then be detected by an ultrasound transducer. The heat can also be detected by a photodetector.

Although it is efficient, the technique still requires contrast agents because diseases, such as tumours and cancer cells, do not show natural photoacoustic and photothermal contrast. Carbon nanotubes are promising candidates as contrast agents because they offer high resolution and allow deep tissue imaging. However, they do not absorb light very well in the near-infrared, a range important for biological imaging.

The hollow core may also be used to potentially carry therapeutic payloads, such as drugs.

"The unique properties of golden nanotubes make them an effective alternative to existing nanoparticles and fluorescent labels for non-invasive targeting of molecular structures in vivo," Zharov told our sister website nanotechweb.org. "They may be used for a variety of biomedical applications, including highly target-specific lymphatic diagnosis and therapy, as well as to treat tumours and infections."

The researchers will now continue exploring the optical properties of these nanoparticles and use double- and multi-walled carbon nanotubes as the core. They will also try adding different biomarkers to the tubes to target different types of cancer cell and investigate the in vivo toxicity of the materials in animals.