Previously seen on the Audi's high-end R8, LEDs from Philips Lumileds are set to penetrate further into the automotive market 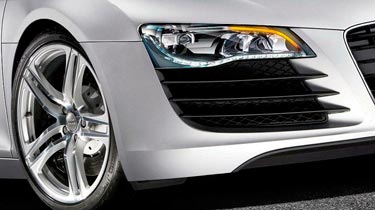 Headlights using LUXEON Altilon LEDs from Philips Lumileds (San Jose, CA) have until now been fitted only to the Audi R8, but the introduction of relevant EU regulations has cleared the way for other automotive manufacturers to adopt them.

Audi had gained a specific exemption earlier in the year, allowing it to employ the lights ahead of completed legislation. Now the door is open for its competitors to fit and assess LED headlamps in their cars.

The move means that the penetration of LEDs into exterior automotive lighting is set to move up a gear, as manufacturers take the opportunity to see whether the anticipated advantages of energy conservation and styling can be exploited.

"The lower power consumption of LEDs can reduce the energy consumption by an average of 40%, with the same or superior performance," Steve Landau of Philips Lumileds commented to optics.org. "LED lighting also allows carmakers to implement styling and branding statements through the sophisticated designs of their solutions, while lowering the overall cost." 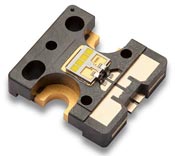 The longer life, stable colour point and capability for very precise and repeatable optical designs all tend to position LED lighting as a premium product. When Audi implemented them in the R8 it said that the LED headlamps would be three times as expensive as their xenon equivalent.

"For the time being, LED solutions are more costly than traditional sources such as halogen and newer sources like xenon," said Landau. "However, the target segment today is also premium-class vehicles. As the cost point comes down in the future, it will enable more cost parity and adoption in large-volume vehicles. Even today, though, the value proposition of the LED solutions provides customers with opportunities to minimize system costs."

The device is available in two configurations: a 1×4 chip array (designed to mimic a traditional filament) and a 1×2 chip array. "The design challenges were to create a high-yielding, highly reliable product with superior thermal performance and colour control," noted Landau. "The LUXEON Altilon employs our Lumiramic phosphor technology to achieve colour targeting and colour point control, and the thermal footprint provides a very straightforward solution for thermal design."

The Audi implementation employs a pair of four-chip arrays and a reflector to produce the dipped beam, along with a similar but separate arrangement for the main beam. Additional two-chip arrays coupled with a high-performance lens system provide additional light around the main spot of the dipped beam.

For motorists, visibility and headlight lifetime will be foremost in their minds. "The brightness level of LED solutions and xenon sources is similar, but the longevity of the LED sources is far superior," said Landau. "For the LUXEON Altilon at normal operating conditions, an average lifetime in excess of 20,000 hours can be expected, which is greater than [what's required during] the life of the vehicle itself."