Data stored using microholograms could allow 100 DVDs to fit on one disc within three years. 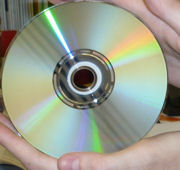 Hundreds of films on one disk?

Researchers at General Electric claim to have made a key breakthrough in optical data storage that could lead to commercial discs holding the equivalent of 100 DVDs within three years.

The new technology is based on the physics of holograms, which enable information to be packed far more densely than with established recording formats. A new device will be needed to play these discs but this will be compatible with established formats like CDs, DVDs and Blu-ray discs, says the US-based team.

In recent years, holography has also been proposed as an attractive technique for storing large quantities of data. Unlike "conventional" storage technologies that record one data bit at a time, holography could record and read more than a million bits of data with a single flash of light. The idea is to represent data bits as microscopic-sized holograms dispersed throughout the body of a suitable optical material.

Early attempts at creating these storage devices have used linear materials such as photopolymers, but these have shown significant limitations. Firstly, the microholograms tend to have larger dimensions than the beam that is producing them and this leads to errors in data transfer. Secondly, in recording multiple layers of holograms, the earlier layers suffer degradation (owing to repeated exposure to the recording beam) and this again reduces the quality of recording.

Now, Victor Ostroverkhov and his colleagues at the General Electric Global Research Center near Albany, New York, have overcome this problem by crafting a bespoke recording medium. The researchers use a special "thermoplastic" that can be "melted" and "frozen" numerous times without significant damage to its internal structure. In this way, they create a material that only alters its refractive index near the waist of the focused writing beam and doesn't inflict damage on the plastic above and below where the bit is being stored.

"We're focused on introducing them to the professional archival storage market in 2012, followed soon after to consumers," said Todd Alhart, media relations manager at General Electric. "GE has been working in holographic storage for the last six years and would be interested in seeing the broadest possible adoption across the industry. To help drive that, we would look to partner across the value chain to enable manufacturers from materials and media to drives and manufacturing equipment."

The research is described in the Japanese Journal of Applied Physics

• This article first appeared on our sister website physicsworld.com.