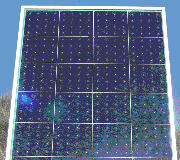 Researchers working on the European Union-funded CrystalClear project have developed technologies that will allow silicon solar modules to be manufactured at a cost of €1/W peak power.

The previous record was held by Sandia National Laboratories, US, at 15.5% aperture-area efficiency. This means that CrystalClear has achieved its target of reducing the costs of photovoltaic (PV) modules by more than 50% (if produced in large volumes).

The record-breaking modules were built using industrial-scale equipment for interconnection and encapsulation of rear-contact PV cells. By developing cell interconnections based on conductive adhesives and patterned foil, the 16.0% efficient module was built with 36 cells of 120 µm thickness. The 16.4% module had 160 µm thick cells – much thinner than the 180–200 µm cells typically used by industry.

The CrystalClear team is now seeking out companies to take on the production of the cells and modules. "Solar-cell manufacturer Solland Solar (Heerlen, Netherlands) has already confirmed interest and other companies are seriously considering the prospect," said Sinke. "We have given a convincing demonstration on a pilot-production level and we are now working on finishing all lifetime tests."

Longer-term plans include building modules with even higher efficiencies (>18%) using thinner cells, a development that will drive costs even lower.