Why Coherent is thinking small

The US laser manufacturer is launching the industry's smallest carbon dioxide laser capable of delivering an average output power of 1 kW. 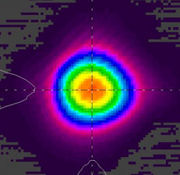 The Diamond E-1000 exploits a sealed slab-discharge design, which has become the technology of choice for precision cutting applications. Unlike the fast-flow CO2 lasers used in heavy-duty materials processing, the resonator in these lasers is filled with gas at the factory and then hard-sealed. This avoids the need for an external gas supply during operation.

"The excellent beam quality, ease of integration, higher cutting speeds and cost compared with conventional lasers of the same performance class makes this a must for any integrator today," enthused Stuart Woods, director of marketing for materials processing at Coherent. "More powerful lasers are available on the market, but they're much larger, more complex and more expensive. Only slab-discharge technology can deliver the compact size, high reliability and low cost-of-ownership that are critical in today's market."

These slab-discharge lasers exploit large, flat electrodes inside the laser cavity to initiate the gas discharge and act as heat sinks that remove excess heat from the CO2. The power output scales with the area of the slab electrodes, which leads to the highest power/size ratio of any laser design.

Until now, however, the average power output from a sealed CO2 laser has peaked at around 600 W, which is powerful enough for cutting plastics and organic materials, but not for cutting tougher materials such as carbon composites and metals. "Theoretically, it's not difficult to get 1 kW from a slab-discharge laser. What's difficult is to get that much power with long-term reliability, operational stability and attractive cost-of-ownership," added Woods. "Achieving this reliability required looking at virtually every component in the laser to find ways to make them better and cheaper."

One key innovation is the integration of the power supply into the laser head. This avoids the need for a cable linking the two that would normally carry several kilowatts of RF power. Removing this cable reduces the overall system cost, simplifies the integration process and eliminates a potential source of laser failure. Long-term reliability has also been improved by a new electrode design that includes ceramic insulators as well as a novel cooling geometry to reduce thermal cycling.

According to Woods, the higher power levels achieved by the new laser enables higher throughputs for established cutting applications, while also making it possible to cut metals with thicknesses of up to a few millimetres. What's more, the laser can cut metal at comparable speeds to a fast-flow CO2 laser operating at a much higher output power.

Such impressive cutting performance is largely a result of the slab-discharge configuration, which naturally produces a high-quality Gaussian output with nearly all the laser power in the central part of beam. The nearly square-wave shaped pulses are also characterized by rapid rise and fall times, which ensures that more of the total pulse energy is delivered above the material processing threshold.

In the Diamond E-1000, the beam quality has been further improved by redesigning the electrodes to generate a more uniform plasma, which in turn yields a more stable mode output, and by optimizing the optics to match the output of the resonator and to correct for its inherent asymmetry. At the same time, the new electrode design, combined with the integration of the power supply, has reduced the pulse rise time to just 50 µs.

"Test results indicate that the combination of fast rise time and improved beam quality enables materials to be cut at up to twice the speed of other 1000 W CO2 lasers," said Woods. "The introduction of a 1000 W slab-discharge laser now makes it possible to construct a single, compact machine capable of cutting both plastics and metals, thus offering maximum flexibility to end-users."