Single atoms can be detected faster and more accurately than ever before, thanks to a new twist on a conventional detector. 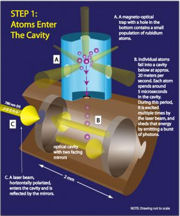 Researchers at the Joint Quantum Institute (JQI) in the US and the Universidad de Concepción in Chile have devised a new technique for real-time detection of freely moving neutral atoms. The technique is more than 99.7% accurate and sensitive enough to discern the arrival of a single atom in less than one-millionth of a second – about 20 times faster than the best previous methods (Nature Physics DOI 10.1038 1282).

Detecting single atoms and molecules is essential for progress in many areas, including quantum information research, chemical detection and biochemical analysis. Until now, however, single-atom measurement systems have been too slow to detect moving atoms.

The new approach exploits a novel method to alter the polarization of laser light trapped between two highly reflective mirrors. In effect this technique allows scientists to "see" atoms passing through the cavity by detecting photons with a particular polarization.

"Our work relaxes the speed constraint associated with moving atoms," says co-author David Norris of JQI. "With other detectors it can be hard to distinguish between a genuine detection and a random false positive without collecting data over a large period of time. Our system both filters the signal and reduces the detection time."

In the experiment, the scientists trap and cool a small population of rubidium atoms in a vacuum enclosure in such a way that they drop slowly, one at a time, through a 1.5 mm hole at the bottom of the trap. The individual atoms enter a cavity sandwiched between two reflective mirrors, which is then probed with a 780 nm horizontally polarized laser beam. This excites the atoms, which in turn causes them to re-radiate vertically polarized light.

However, the signal generated by the single atoms is too weak to enable accurate detection, so the researchers had to devise a way to boost the amount of vertically polarized light.

Their solution is to apply a magnetic field to the cavity, which alters the polarization of the laser light when an atom is present.

This phenomenon is typically very weak when a single atom is present but in this case the light reflected between the mirrors passes the atom about 10,000 times. The result is a much larger rotation of a few degrees, which puts much more of the laser light into the vertical polarization and makes the atoms easier to detect.

Although the detector for the vertically polarized light should only be sensitive to light coming from an atom in the cavity, it can be fooled by stray light in the room. However, each atom typically produces multiple emissions, leading to a burst of photons whenever an atom passes between the mirrors – and this is the signature that the researchers use to confirm the presence of an atom.