Blue laser diode lined up for applications in interferometry and holographic data storage. 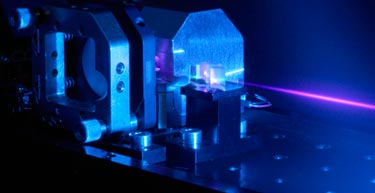 The new BlueMode laser from TOPTICA Photonics, Germany, is being billed as the first blue laser diode to combine high power output (50 mW) with a coherence length exceeding 25 m. The company reckons that its innovative design will finally offer a realistic alternative to gas-ion lasers for applications such as interferometry and holography in the blue-violet spectral range.

"We have talked to OEM customers who have tried to use diode technology in the past, but got frustrated because of the low coherence," said Anselm Deninger, product manager at TOPTICA. "We will have a live system on show at the LASER exhibition [in Munich next month], and we are excited to see how the laser will be received."

The BlueMode laser delivers 50 mW at 405 nm, which has become a popular wavelength for optical data storage applications. Stringent quality control is a must for these storage systems, and the optical elements are typically inspected using interferometric techniques at 405 nm. High power output is vital to shorten the measurement time and optimize the signal-to-nose ratio, while a long coherence length is needed to achieve good contrast between the interferometric fringes.

"The coherence length of high-power laser diodes in the violet spectral range has so far been limited to a few millimetres at most, and thus violet diodes have generally been considered unsatisfactory for applications such as interferometry," explained Deninger. Narrow spectral line widths have been achieved with grating-stabilized lasers, but the single-frequency output power produced by these lasers is typically no more than 15 mW.

The BlueMode laser has a spectral linewidth of 5 MHz, which guarantees a coherence length of more than 25 m. Deninger declined to provide details of the underlying technology, but believes that the BlueMode laser will prove popular with industrial users.

"Frequency-converted systems with a resonant-enhancement cavity are ideal tools for scientific research, but too complex and costly for industrial applications," he said. "Gas-ion lasers are also considered too expensive, and too cumbersome to operate."

One key advantage of the BlueMode laser is that its total power consumption is around 10 W, compared with more than 50 W for a gas-ion laser. "For the user it's a 'hands-off' system that requires no manual tweaking or alignment, yet offers extremely stable laser power and mode properties," said Deninger.

Another important application for the BlueMode laser is holography, since 405 nm has become the wavelength of choice for a new generation of holographic data-storage solutions. Nonlinear processes such as Raman spectroscopy and photonic down-conversion also require high-power output at 405 nm to increase the strength of the frequency-converted signal.

According to Deninger, the BlueMode laser is already attracting some serious interest from both the research and industrial communities. A clear roadmap is also in place to extend the technology to other wavelengths, such as 375, 445 and 488 nm, depending on customer demand. "If there is interest in other wavelengths, we could transfer the technology within a couple of months," he said.