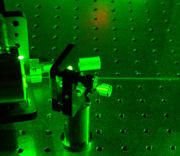 Laser-diode gets the green light

A green laser-diode design that emits 1.5 W output power could replace its solid-state counterparts, say researchers at the Technical University of Denmark in the city of Lyngby. The team says that its simple laser design generates "the highest output power of green light using a frequency-doubled approach" (Optics Express 17 6532).

"Our laser system is potentially cheap, robust and efficient compared with existing technology," Ole Jensen, a researcher at the Technical University of Denmark, told optics.org. "Our laser may replace solid-state lasers for applications ranging from biomedicine to displays."

The green laser-diode is a particular challenge as no semiconductor material exists that can be used to directly produce green laser light. Until now, generating high-power green light has only been possible by using frequency-doubled solid-state lasers or external-cavity frequency doubling of complicated master-oscillator power-amplifier systems.

Current display applications use solid-state lasers as the green source. The drawback of these lasers is that they cannot be modulated at high frequencies without an external modulator, which complicates the system and increases cost. Laser-diodes, however, can be modulated at high frequencies simply by adjusting the laser current. This simple scheme would simultaneously reduce size and cost.

The key to the Danish diode is a novel tapered design. A tapered laser-diode is used as a pump source for second-harmonic generation – a process that results in over 9 W of nearly diffraction-limited power in a narrow spectral region. The light is then frequency-doubled in a single-pass configuration using a periodically poled MgLN crystal, which leads to 1.58 W of output power at a wavelength of 531 nm.

While the current device is a table-top version, the Danish team is now working on reducing the size of the laser and investigating commercial potential. "The next steps will include increasing the conversion efficiency, resulting in higher green output power," concluded Jensen. "This technique can also be expanded to generate other colours in the visible spectral region and this will also be pursued in the future."

This research was carried out with colleagues at FBH in Berlin within the European project WWW.BRIGHTER.EU.