Revenues from lighting are set to overtake displays as OLED technology advances. 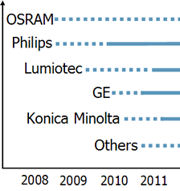 The breakthrough moment for OLED lighting is fast approaching, as manufacturing technology tackles the barriers to wide adoption of OLEDs in the lucrative illumination market.

From 2011 onwards, revenues from OLED lighting will gain rapid momentum and are forecast to surpass those from passive matrix OLED displays in 2013/2014, according to a report from DisplaySearch.

"The unique features of OLED lighting are inspiring the imagination of designers, but the imminent growth in lighting applications is really due to continuing advances in the technology," commented Jennifer Colegrove of DisplaySearch to optics.org. "Hundreds of millions of dollars have been invested in OLED lighting, especially in Europe, the US, and Japan. Manufacturing methods and material technology have all advanced, and the costs are being reduced."

As a result the OLED lighting market could be worth $6 billion by 2018, according to OLED Lighting in 2009 and Beyond: The Bright Future published by DisplaySearch.

"Although OLED displays have been in mass production for about a decade, OLED lighting has only now started sampling and small volume production," said Colegrove. "This is due to the fact that OLED displays and OLED lighting face different challenges. In displays those challenges are to do with the need for accurate fine patterning and the quality of the backplane. On the other hand, OLED lighting must address issues of cost, uniformity of large-area illumination, high luminance, and infrastructure."

If these challenges can be addressed, the attractions of OLED lighting are numerous. "OLED lighting devices emit from the surface, can be made flexible or rollable, and even transparent like a window or reflective like a mirror," said Colegrove. "It is thin, rugged, lightweight, environmentally friendly, and the power efficiency of OLED lighting has also improved dramatically in recent years."

As the sector grows, a number of major players are due to enter the market. Philips, GE, Konica Minolta, Lumiotec and OSRAM are all due to enter mass production of OLED illumination by the 2011 tipping point, according to Colegrove.