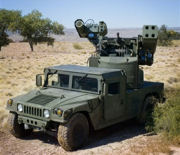 A mobile laser system featuring high-power diodes from IPG Photonics has become the first to destroy an unmanned aerial vehicle (UAV), echoing the impact that the company's fibre-laser products are having on its own competitors. December 2008 saw a demonstration of the multi-kilowatt output laser as part of Boeing's Avenger mobile defence system at a New Mexico missile range.

In the same financial quarter IPG said it earned $24.8 million from similar high-power lasers, up 32 percent from the same period during 2007. "We believe that in North America, our competitors are getting very few orders for high-power lasers, and that the orders are coming to IPG," said Tim Mammen, the company's chief financial officer.

Mammen underlined the importance of the Avenger trial in proving that the tracking and beam optics technology required to shoot down a moving object with a laser could work. IPG and its customers will release other similar results before the end of March, based on products from its advanced applications business unit.

In the December quarter IPG's advanced applications unit also sold a high-value 20 kW system into Europe, which could be used for military or industrial applications. That helped the division grow sales by 65 percent sequentially, but it still only recorded 15 percent of the company's overall $58.2 million revenues.

That total figure is down from $62 million in the prior quarter, just as IPG's profits fell from $10.9 million to $9.1 million sequentially. IPG Photonics now expects revenues to fall below $50 million in the current financial period, down around 10 percent year-over-year. But as analyst CJ Muse of Barclays Capital noted in the conference call to discuss IPG's results, its rivals are expecting quarterly sales to drop by around 25 percent on average.

While military applications will contribute to this robustness through increased government spending, IPG argues that its industrial systems could capitalize on the weak economy.

Materials processing comprised 79 percent of IPG's sales for the quarter, which were swollen by a large order to car maker BMW. That order contributed to IPG's 6 percent growth in Europe, although this was offset by softness in other European geographies as a result of economic weakness.

IPG intends to bring more manufacturing under its complete control, and is expanding further beyond GaAs high power diode production at its Oxford, Massachusetts, plant. Mammen says efforts to make expensive parts that were previously outsourced will complement the recently started mass production of 30 W diodes that should reduce costs by up to 30 percent.

Although the company has curtailed bonuses and overtime, and frozen hiring, it only plans to reduce headcount through natural attrition and still expects profitability for the current period .